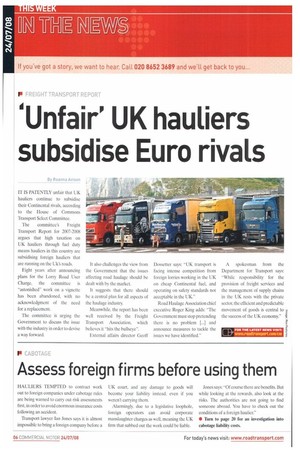 By Roanna Avison IT IS PATENTLY unfair that UK hauliers continue to subsidise their Continental rivals, according to the House of Commons Transport Select Committee.

The committee's Freight Transport Report for 2007-2008 argues that high taxation on UK hauliers through fuel duty means hauliers in this country are subsidising foreign hauliers that are running on the Uk's roads.

Eight years after announcing plans for the Lorry Road User Charge, the committee is "astonished" work on a vignette has been abandoned, with no acknowledgment of the need for a replacement.

The committee is urging the Government to discuss the issue with the industry in order to devise a way forward. It also challenges the view from the Government that the issues affecting road haulage should be dealt with by the market.

It suggests that there should be a central plan for all aspects of the haulage industry.

Meanwhile, the report has been well received by the Freight Transport Association, which believes it "hits the bullseye".

External affairs director Geoff Dossetter says: "UK transport is facing intense competition from foreign lorries working in the UK on cheap Continental fuel, and operating on safety standards not acceptable in the UK."

Road Haulage Association chief executive Roger King adds: "The Government must stop pretending there is no problem [...] and announce measures to tackle the issues we have identified." A spokesman from the Department for Transport says: "While responsibility for the provision of freight services and the management of supply chains in the UK rests with the private sector, the efficient and predictable movement of goods is central to the success of the UK economy."