MR, HARRIS ISSUES A DENIAL I N a letter to us from Mr, M. W. 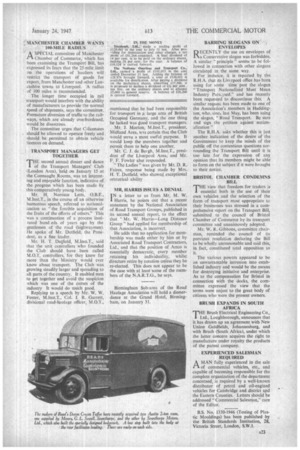 Page 25, 24th January 1947 — MR, HARRIS ISSUES A DENIAL I N a letter to us from Mr, M. W.
Close
Noticed an error?
If you've noticed an error in this article please click here to report it so we can fix it.
Keywords : Contract, Contract Law, Politics

Harris, he points out that a reeenl statement by the Nationai Association of Road Transport Groups, published in its second annual report, to the effect that "Mr. W. Harris—Long Distance Group" had applied for membership of that Association, is incorrect.

He adds that no application for membership was made either by him or by Associated Road Transport Contractors, Ltd., and that the position of Artco is essentially democratic, every member retaining his individuality, whilst directors retire by rotation unless they be re-elected. This does not appear to be the case with at least some of the members of the N.A.R.T.G., he says.