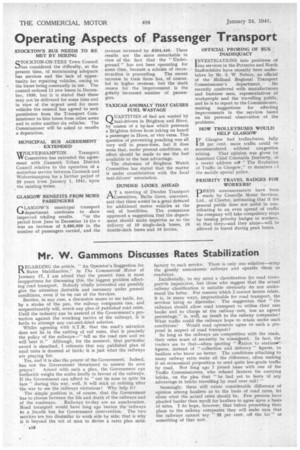 Page 20, 24th January 1941 — Operating Aspects of Passenger Transport
Close
Noticed an error?
If you've noticed an error in this article please click here to report it so we can fix it.
Keywords : Transport In Brighton And Hove, Transport In East Sussex, Bus, Trolleybus, Brighton & Hove

STOCKTON'S BUS NEEDS TO BE MET BY HIRING

STOCKTON-ON-TEES Town Council has considered the difficulty, at the present time, of maintaining adequate bus services and the lack of opportunity for repairing vehicles, owing to the buses being constantly in use. The council ordered 11 new buses in December, 1939, but it is stated that these may not be delivered for some time and in view of the urgent need for more vehicles the council has agreed to seek permission from the Transport Commissioner to hire buses from other areas and to order another six vehicles. The Commissioner will be asked to receiire a deputation.

MUNICIPAL BUS AGREEMENT EXTENDED WOLVERHAMPTON Transport VV Committee has extended the agreement with Cannock Urban District Council relative to the operation of a motorbus service between Cannock and Wolverhampton for a further period of 20 years from January 1, 1941, upon the existing terms.

GLASGOW' S municipal transport 11/4-11department continues to show improved trading results. or the period from June to December 14 the '9 was an increase of 9,680,000 in the number of passengers carried, and the

revenue increased by 2304,440. These results are the more remarkable in view of the fact that the " Underground" has not been operating for some time, because a scheme of recon struction is proceeding. The recent increase in tram fares has, of course, led to higher revenue, but the main reason for the improvement is the greatly increased number of passengers.

QUANTITIES of fuel are wasted b37 taxi-drivers in Brighton and Hove, by reason of a by-law which prevents a Brighton driver from taking on board a passenger in Hove, or vice versa. This question of preventing poaching was all very well in peace-time, but it does seem that, under present conditions, an effort should be made to use the fuel available to the best advantage.

The chairman of Brighton Watch Committee has stated that the matter is under consideration with the focal taxi-drivers association.

AT a meeting of Dundee Transport Committee, Bailie Gove, convener, said that there would be a great demand for additional motor vehicles at the end„ of hostilities. The committee approved a suggestion that the department should make inquiries as to the delivery of 10 single-deck buses, 10 double-deck buses and 10 lorries. OFFICIAL PROBING OF BUSS

I NVESTIGATIONS into problems of

bus services in the Potteries and North Staffordshire have recently been undertaken by Mr. S. W. Nelson, an official of the Midland Regional Transport Commissioner's department. He recently conferred with manufacturers and business men, representatives of workpeople and the travelling public, and he is to report to the Commissioner, making suggestions for effecting improvements in the services based on his personal observation of the problems.

HOW TROLLEYBUSES WOULD HELP GLASGOW

IF Glasgow had trolleybuses, fully 25 per cent, more traffic could oe accommodated without congestion arising. That opinion was given by Assistant Chief Constable Docherty, in a recent address or? "The Evolution of Traffic in Glasgow," to members tf the mobile special police.

,DRESS announcements have been / made by Crosville Motor Services, Ltd.. of Chester, intimating that if the general public does not assist in contributing to an even spread of traffic the company will take compulsory steps by issuing priority badges to workers, so that they.-and they alone—will be allowed to travel during peak hours.