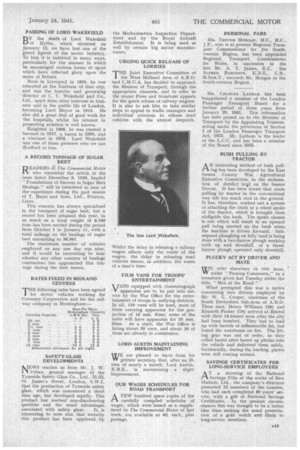 BY the death of Lord Wakefield of Hythe, which occurred on January 15, we have lost one of the grand figures of the motor industry. To him it is indebted in many ways, particularly for the manner in which he encouraged various forms of sport which . have reflected glory upon the name of Britain.

Born in Liverpool in 1859, he was educated at the Institute of that city, and was the . founder and governing director of C. C. Wakefield and Co., Ltd., apart from other interests in business and in the public life of London, becoming Lord Mayor in 1915. He also did a great deal of good work for the hospitals, whilst his interest in promoting aviation is well known.

A RECORD TONNAGE OF SUGAR BEET

D EADERS o'f The Commercial Motor I% who remember the article in the issue dated December 9, 1939, headed " Foundations of Success in Sugar Beet Haulage," will be interested to hear of theexperience during the past season c>f T. Bates and Sons, Ltd., Pointon, Lincs.

This concern has always specialized in the transport of sugar beet, but a record has been attained this year, in as much as a total weight of 8,039 .tons has been carried during the period from 'October 1 to January 11, with a total mileage on the haulage of sugar beet amounting to 38,961.

The maximum number of vehicles employed on any one day was nine, and it would be interesting to hear whether any other concern of haulage contractors has approached this tonnage during the beet season.

Urban, general manager of the Tyneside Safety Glass Co., Ltd., 31-32, St. James's Street, London, S.W.1, that the production of Tyneside safety glass, which was announced a short time ago, has developed rapidly. This .product has marked non-discolouring qualities and the usual advantages

associated with safety glass. It, is interesting to note also that recently this product has been approved• by the Mechanisation Inspection Department and by the Royal Aircraft Establishment. It is being Used as well by certain big motor manufacturers.

THE Joint Executive Committee of the West Midland Area of A.R.O. 'and C.M.U.A. has decided to approach the Minister of Transport, through the appropriate channels, and to refer to the recent Press and broadcast appeals for the quick release of railway wagons. It is also to ask him to take similar steps to appeal to traffic managers and individual concerns to release road vehicles with the utmost despatch.

FILM VANS FOR TROOPS' ENTERTAINMENT I TANS equipped with cinematograph apparatus are to be put into service by the War Office for the entertainment of troops in outlying districts. In all, ISO vans will be used, most of them carrying apparatus for the projection of 16 mm. films; some of the units will have apparatus for 35 mm. films. As a start, the War Office is hiring about 50 vans, and about 30 of these are already in commission.

WE are pleased to learn from his private secretary that, after an illness of nearly a month, Lord Austin, K.B.E., is maintaining a slight improvement.

OUR WAGES SCHEDULES FOR ROAD TRANSPORT

A FEW hundred spare copies of the carefully compiled schedules of wages, which were issued as a supplement to The Commercial Motor of last week, are available at 6d. each, plus postage.

A N interesting method of bush pull/-1 ing has been developed by the East Sussex County War Agricultural Executive Committee, in the reclamation of derelict laid on the Sussex Downs. It has been found that chain pulling by tractor in the conventional way left too much root in the ground. It has, therefore, worked out a system of attaching the chain to a wheel spoke of the tractor, which is brought close alongside the bush. The spoke chosen is one which will result in an upward pull being exerted on the bush whenthe machine is driven forward. Subsequent ploughing on hilly land is being done with a two-furrow plough working both up and downhill, or a threefurrow plough operated only downhill.

PLUCKY ACT BY DRIVER AND MATE

WE refer elsewhere in this issue, under "Passing Comments," to a broadcast given last Tuesday under the title, "Men of the Road."

What prompted this was a notice concerning two drivers employed by Mr. W. G. Cooper, chairman of the South Derbyshire Sub-Area of A.R.O. These men, Henry Williams (28) and Kenneth Parker (19) arrived at Bristol with their 15-tonner soon after the city had been bombed. They had to load up with barrels of inflammable fat, but found the warehouse on fire. The lifting gear was out of order, so they rolled barrel after barrel up planks into the vehicle and delivered them safely. Incidentally, during the loading, planes were still roaring around, SAVINGS CERTIFICATES FOR LONG-SERVICE EMPLOYEES

AT a showing. of the National Savings Film at the works of New Hudson, Ltd., the company's directors presented 12 members of the concern, who had each completed 40 years' service, with a gift of National Savings Certificates. In the present circumstances this was thought to be a better idea than making the usual presentation of a gold watch and chain to long-service members,