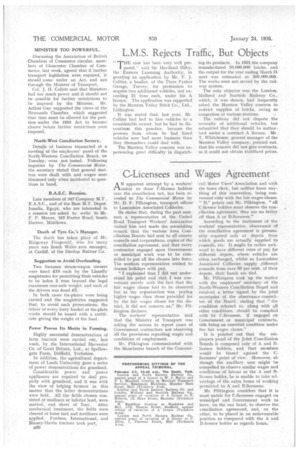 AN apparent attempt by a workers' union to draw -C-licence holders into the conciliation net, has be-en revealed to The Commercial Motor by Mr, D. F. Pilkington, transport officer to Lancashire Associated Collieries.

He states that, during the past summer, a representative of the United Road Transport Workers' Association visited him and made the astonishing remark that the various Area Corn ciliation Boards had sent to all county • councils and corporations, copies of the

conciliation agreement, and that every contractor engaged upon Government or municipal work was to be compelled to .put all the clauses into force. The workers representative wished to discuss holidays with pay.

" I explained that I did not understand his point and that I was conversant merely with the fact that the fair. wages clause had to be observed but as my organization was paying higher wages than those provided for by the fair wages clause for the district, it did not concern us.." Mr. Pilkington declares.

The Workers' representative said that the Ministry of Transport was asking the unions to report cases of Government contractors not observing all the provisions regarding. wages and conditions of employment.

Mr. Pilkington communicated with the Manchester branch of the Cornmer dal Motor Users' Association and with the town clerk, but neither knew anything of this innovation, being conversant only with the fair wages clause. " If," points out Mr. Pilkington, "all C-licence holders must observe the conciliation agreement, they are no better off than A or Blicensees.." •

According to the statement of the workers' representative, observaneis of the conciliation agreement is presurriably required only at depots from which goods are actually, supplied to councils, etc. It might be rather av.*ward to have different rates of pay.for different depots, where vehicles are often exchanged, whilst as Lancashire Associated Collieries supply Aifferent councils from over 110 per cent, of their depots, their hands are tied,

Mr. Pilkington took 'up the matter with the employers' secretary of the North-Western Conciliation Board and received a letter signed. by the joint secretaries of the observance committee of the Board, stating that," the condition referred to, along with • all other conditions, should be complied with by Clicensees, if engaged on Government or municipal contracts, this being an essential condition under the fair wages clause."

It is pointed out that the employers panel of the Joint Conciliation 'Boards is composed only of A and Blicence holders, and that members would be biased against the Clicensees' point of view-. MoreoYer, although the' ancillary user might be compelled to observe similar wages and conditions of labour as 'the A and Blicence holder, he is unable to take advantage of the extra hours Of working permitted to A and B-licensees.

Mr. Pilkington considers that it is most unfair for Cdicensees engaged on municipal and Government work to have, on the one hand, to observe the conciliation agreement, and, On the other, to be placed in an unfavourable 'position as compared with the A and B-licence -holder as regards hours.'