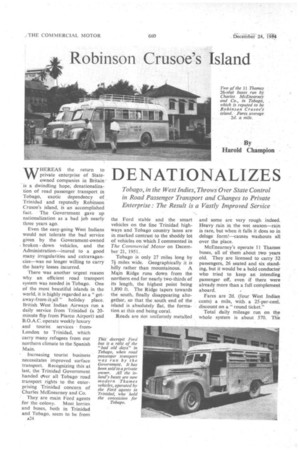 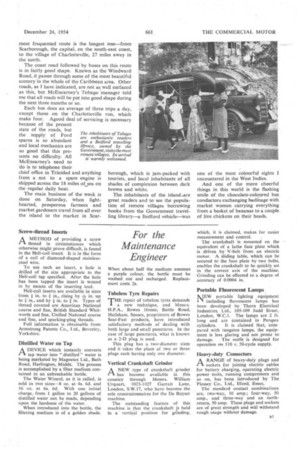 Tobago, in the West Indies, Throws Over State Control in Road Passenger Transport and Changes to Private Enterprise : The Result is a Vastly Improved Service

WHEREAS the return to private enterprise of Stateowned companies in Britain is a dwindling hope, denationalization of road passenger transport in Tobago, exotic dependency of Trinidad and reputedly Robinson Crusoe's island, is an accomplished fact. The Government gave up nationalization as a bad job nearly three years ago.

Even the easy-going West Indians would not tolerate the bad service given by the Government-owned broken down vehicles, and the Administration—inured to a good many irregularities and extravagancies—was no longer willing to carry the heaq losses incurred.

There was another urgent reason why an efficient road transport system was needed in Tobago. One of the most beautiful islands in the world, it is highly regarded as a " getaway-from-it-all" holiday place. British West Indian Airways run a daily service from Trinidad (a 20minute flip from Piarco Airport) and B.O.A.C. operate weekly luxury and tourist services from. London to Trinidad, which carry many refugees from our northern climate to the Spanish Main.

They are main Ford agents for the colony. Most lorries and buses, both in Trinidad and Tobago, seem to be from A24 the Ford stable and the smart vehicles on the fine Trinidad highways and Tobago country lanes are in marked contrast to the shoddy lot of vehicles on which I commented in The Commercial Motor on December 21, 1951.

Tobago is only 27 miles long by 7i miles wide. Geographically it is hilly rather than mountainous. A Main Ridge runs down from the northern end for nearly two-thirds of its length, the highest point being 1,890 ft. The Ridge tapers towards the south, finally disappearing altogether, so that the south end of the island is absolutely flat, the formation at this end being coral.

Roads are dot uniformly metalled and some are very rough indeed. Heavy rain in the wet season—rain is rare, but when it falls it does so in deluge form!—causes washouts all over the place.

McEneamey's operate 11 Thames buses, all of them about two years old. They are licensed to carry 32 passengers, 26 seated and six standing, but it would be a bold conductor who tried to keep an intending passenger off, even if there were already more than a full complement aboard. • Fares are Zd. (four West Indian cents) a mile, with a 25-per-cent. discount on a " round ticket."

Total daily mileage run on the whole system is about 570. The most frequented route is the longest one—from Scarborough, the capital, on the south-east coast, to the village of Charlotteville, 27 miles away in the north.

The coast road followed by buses on this route is in fairly good shape. Known as the Windward Road, it passes through some of the most beautiful scenery in the whole of the Caribbean area. Other roads, as I have indicated, are not as well surfaced as this, but MeEnearney's Tobago manager told me that all roads will be put into good shape during the next three months or so.

Each bus does an average of three trips a day, except those on the Charlotteville run, which make four. Agood deal of servicing is necessary because of the present state of the roads, but the 'supply of Ford spares is so abundant and local mechanics are so good that this presents no difficulty. All McEnearney's need to do is to telephone their chief office in Trinidad and anything from a nut to a spare engine is shipped across the 18 miles of sea on the regular daily boat.

The main business of the week is done on Saturday, when lighthearted, prosperous farmers and market gardeners travel from all over the island to the market in Scar borough, which is jam-packed with tourists, and local inhabitants of all shades of complexion between dark brown and white.

The inhabitants of the islandsare great readers and to see the population of remote villages borrowing books from the Government travelling library—a Bedford vehicle—was one of the most colourful sights encountered in the West Indies.

And one of the more cheerful things in this world is the flashing smile of the chocolate-coloured bus conductors exchanging badinage with market women carrying everything from a basket of bananas to a couple of live chickens on their heads.