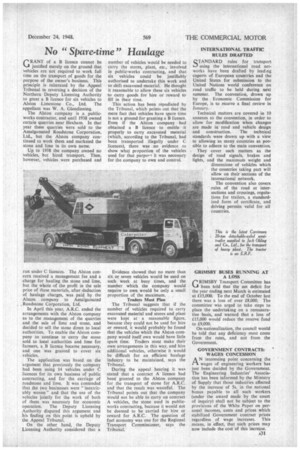 Page 33, 24th December 1948 — No Spare-time" Haulage G RANT of a B licence cannot be
Close
Noticed an error?
If you've noticed an error in this article please click here to report it so we can fix it.

justified merely on the ground that vehicles are not required to work full time on the transport of goods for the purpose of the owner's business, This principle is reiterated by the Appeal Tribunal in reversing a decision of the Northern Deputy Licensing Authority to grant a B licence for six vehicles to Alston Limestone Co., Lid. The appellant was W. A. Glendinning.

The Alston company is a publicworks contractor, and until 1938 owned certain quarries near Hexham. In that year these quarries were sold to the Amalgamated Roadstone Corporation, Ltd., but the Alston company continued to work them and marketed the stone and lime in its own name.

Up to 1938 the company owned no vehicles, but hired transport. Then, however, vehicles were purchased and run under C licences, The Alston concern received a management fee and a charge for hauling the stone and lime, but the whole of the profit in the sale price of these materials, after deduction of haulage charges, was paid by the Alston company to Amalgamated Roadstone Corporation, Ltd.

In April this year, A.R.C. ended the arrangements with the Alston company as to the management of the quarries and the sale of lime and stone, and decided to sell the stone direct to local authorities. To enable the Alston company to continue to carry the stone sold to local authorities and lime for farmers, a B licence became necessary, and one was granted to cover six vehicles.

The application was based on the argument that previously the company had been using 14 vehicles under C licences for its own business of public contracting, and for the carriage of roadstone and lime. It was contended that the two businesses were "inextricably woven" and that the use of the vehicles jointly for the work of both of them was necessary for economic operation. The Deputy Licensing Authority disputed this argument and his finding on this point is upheld by the Appeal Tribunal.

On the other hand, the Deputy Licensing Authority considered that a number of vehicles would be needed to carry the stores, plant, etc., involved in public-works contracting, and that six vehicles could be justifiably authorised to undertake this work and to shift excavated material. He thought it reasonable to allow these six vehicles to carry goods for hire or reward to fill in their time.

This action has been repudiated by the Tribunal, which points out that the mere fact that vehicles have spare time is not a ground for granting a B licence. Even if the Alston company had obtained a B licence to entitle it properly to carry excavated material (which, according to the Tribunal, had been transported illegally under C licences), there was .no evidence to show what proportion of the vehicles used for that purpoFa it was necessary for the company to own and control.

Evidence showed that no more than six or seven vehicles would be used on such work at busy times, and the number which the company would require to own would be only a small proportion of the maximum.

The Tribunal suggests that if the number of vehicles required to carry excavated material and stores and plant were kept at a reasonable figure, because they could not be used for hire or reward, it would probably be found that the vehicles which the Alston company would itself own would have little spare time. Traders must make their own arrangements in this way, and hire additional vehicles, otherwise it would be difficult for an efficient haulage industry to be maintained, says the Tribunal.

During the appeal hearing it was stated that a contract A licence had been granted to the Alston company for the transport of stone for A.R.C. and that the result was wasteful. The Tribunal points out that the company would not be able to carry on contract A vehicles, the stone used in publicworks contracting, because it would not be deemed to be carried for hire or reward for A.R.C. The question of fuel economy was one for the Regional Transport Commissioner, says the Tribunal.