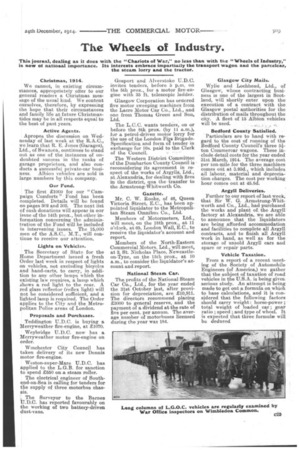 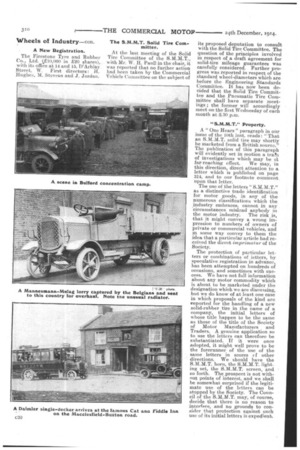 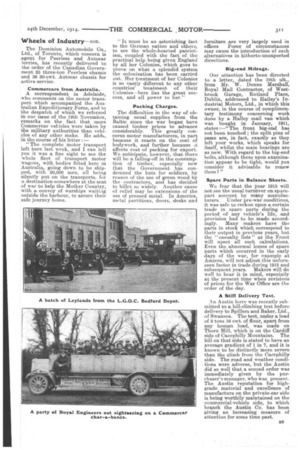 Page 11, 24th December 1914 — The Wheels of Industry.
Close
Noticed an error?
If you've noticed an error in this article please click here to report it so we can fix it.
Keywords : Steam Wagon, Society Of Motor Manufacturers And Traders, Tire, Mini, Ford Motor Company, Austin Motor Company, Bicycle

This journal, dealing as it does with the "Chariots of War," no less than with the "Wheels of Industry," is now of national importance. Its interests embrace impartially the transport wagon and the parcelcar, the steam lorry and the tractor.

We cannot, in existing circumstances, appropriately offer to our general readers a Christmas message of the usual kind. We content ourselves, therefore, by expressing the hope that their circumstances and family life at future Christmastides may be in all respects equal to the best of past years.

Apropos the discussion on Wednesday of last week at the R.A.C., we learn that B. E. Jones (Garages), Ltd., of Swansea, continues to stand out as one of the instances of undoubted success in the ranks of garage proprietors, and also conducts a successful private-ear busi ness. Albion vehicles are sold in large numbers by this company.

Our Fund, The first 21000 for our "Campaign Comforts " Fund has been completed. Details will be found on pages 302 and 303. The next list of cash donations will appear in our issue of the 14th prox., but other information concerning the administration of the Fund will be included in intervening issues. The 15,000 men of the A.S.C.. _MT., will continue to receive our attention.

The Secretary of State for the Home Department issued a fresh Order last week in respect of lights on vehicles, not excluding bicycles and hand-carts, to carry, in addition to any other lamps which the existing law requires, a lamp which hows a red light to the rear. A red glass reflector (reflex light) will not be considered sufficient, and a lighted lamp is required. The Order applies to the City and the Metropolitan Police areas of London.

Teddington U.D.C. is buying a Merryweather fire-engine, at 21070.

Weybridge U.D.C. now has a Merryweather motor fire-engine on order.

Weston-super-Mare U.D.C. has applied to the L.G.B. for sanction to spend 2550 on a steam roller.

The electrical engineer of Southend-on-Sea is calling for tenders for the supply of three motorbus chassis.

The Surveyor to the Barnes U.D.C. has reported favourably on the working of two battery-driven dust-vans.

Gosport and Alverstoke U.D.C. invites tenders, before 5 p.m. on the 5th prox., for a motor fire-engine with 35 ft. telescopic ladder.

Glasgow Corporation has ordered five motor sweeping machines from the Lacre Motor Car Co., Ltd., and one from Thomas Green and Son, Ltd.

The L.C.C. wants tenders, on or before the 8th prox. (by 11 asm.), for a. petrol-driven motor lorry for the use of the London Fite Brigade. Specification and form Of tender in exchange for 10s. paid to the Clerk of the Council.

The Western District Committee of the Dumbarton County Council is reconsidering its agreement in respect of the works of Argylls, Ltd., at. Alexandria, for dealing with fires in the district, qua the • transfer to the Armstrong-Whitworth Co.

Members of the North-Eastern Commercial Motors. Ltd. will meet, at 2, St. Nicholas Place, Newcastleon-Tyne, on the 15th prom., at 10 a.m., to consider the liquidator's account and report.

The profits of the National Steam Car Co., Ltd., for the year ended the 31st October last, after provision for depreciation, are 210,911. The directors recommend placing 23000 to general reserve, and the payment of a dividend at the rate of five per cent., per annum. The average number of motorbuses licensed during the year was 184. Glasgow City Mails.

Wylie and Lochhead, Ltd., of Glasgow, whose contracting business is one of the largest in Scotland, will shortly enter upon the execution of a contract with the Glasgow postal authorities for the distribution of mails throughout the city. A fleet of 15 Albion vehicles will be used.

Particulars are to hand with regard to the cost of running of the Bedford County Council's three 5iton Commercar wagons. These include detail costs for the year ended 31st March, 1914. The average cost per ton-mile for the three machines comes out at 3.93d., which includes all labour, material and depreciation charges. The cost per working hour comes out at 45.8d.

Further to our report of last week, that Sir W. G. Armstrong-Whitworth and Co., Ltd., had purchased the works and plant of the Argyll factory at Alexandria, we are able to announce that the liquidators are being afforded accommodation and facilities to complete all Argyll contracts, and to finish all Argyll work in hand, as well as for the storage of unsold Argyll cars and spare or repair parts.

From a report of a recent meets ing of the Society of Automobile Engineers (of America) we gather that the subject of taxation of road vehicles in the U.S.A. is being given serious study. An attempt is being made to get out a formula on which to base calculations, and it is considered that the following factors should carry weight : horse-power ; total weight of loaded car ; gear ratio; speed ; and type of wheel. It is expected that three formuhe will be deduced A New Registration.

A "One Hears" paragraph in our issue of the 10th inst. reads : "That an S.M.M.T. solid tire may shortly be marketed from a British source.' The publication of this paragraph will evidently set in motion a traigi of investigations which may be a

far-reaching effect. We May, in this direction, direct attention to a i letter which s published on page 314, and to our footnote comment. upon that letter.

The use of the letters " as a distinctive trade identification for motor goods, in any of the numerous classifications which the industry embraces, cannot in any circumstances mislead anybody in

the motor industry. The risk is, that it might convey a wrong impression to numbers of owners of private or commercial vehicles, and in some way convey to them the idea that a particular article had received the direct imprimatur of the Society.

The protection of particular letters or combinations of letters, by speculative registration in advance, has been attempted on hundreds of occasions, and sometimes with success. We have not full information about any motor commodity which is about to be marketed under the designation which we are discussing, but we do know of at least one case in which proposals of the kind are reported for the handling of a new solid-rubber tire in the name of a company, the initial letters of whose title happen to be the same as those of the title of the Society of Motor Manufacturers and Traders. A genuine application so to use the letters can therefore be substantiated. If it were once adopted, it might well prove to be the forerunner of the use of the same letters in scores ef other directions. We should have the S.M.M.T. horn, the S.M.M.T. lighting set, the S.M.M.T. screen, and • so forth. The prospect is not without points of interest, and we shall be somewhat surprised if the legitimate use of the letters can be stopped by the Society. The Council of the S.M.M.T. may, of course, decide that there is no reason to interfere, and no grounds to consider that protection against such use of its initial letters is expedient.

The Dominion Automobile Co., Ltd., of Toronto, which concern is agent for Peerless and Autocar lorries, has recently delivered to the order of the Canadian Government 25 three-ton Peerless chassis and 36 30-cwt. Autocar chassis for active service.

A correspondent in Adelaide, who comments on the motor transport which accompanied the Australian Expeditionary Force, and to the despatch of which we referred in our issue of the 12th November, remarks on the fact that more Commerear veticles were taken by the military authorities than vehicles of any other make. He adds, in the course of his letter :—

"The complete motor transport left here last week, and I can tell you it was a, fine sight to see the whole fleet of transport motor wagons, with bodies fitted here in Australia, going down to be shipped, with 20,000 men, all being silently put on the transports, for a destination somewhere at the seat of war to help the Mother Country, with a, convoy of warships waiting outside the harbour, to assure their safe journey home.

"It must be an astonishing fact to the German nation and others, to see the whole-hearted patriotism, coupled with. the fact of the practical help being given England by all her Colonies, which goes to prove on what a splendid system the colonization has been carried out. Her treatment of her Colonies is so vastly different to any other countries' treatment of their Colonies—here lies the great success, and all power to her."

The difficulties in the way of obtaining usual supplies from the Baltic since the war began have caused timber prices to advance considerably. 'Phis greatly concerns motor manufacturers, in. part because it reacts on the cost of bodywork, and further because a affects cost of packing for export. We anticipate, however, that there will be a falling-off in the consumption of timber, especially now that the Government has condemned the huts for soldiers, by reason of the use of green wood by the contractors, and has decided to billet so widely. Another cause of relief may be extensions of the use of pressed metal. In America, metal partitions, doors, desks and

furniture are very largely used in offices Force of circumstances may cause the introduction of such alternatives in hitherto-unexpected directions.

Our attention has been directed to a letter, dated the 19th ult., from Mr. W. Donne Marshall, Royal Mail Contractor, of Westbrook Garage, Rutland Place, Dublin, addressed to Halley's Industrial Motors, Ltd., in which this owner, in the course of complimentary testimony concerning work done by a Halley mail van which was bought in January, 1911, states :—" The front big-end has not been touched ; the split pins of same are, in fact, exactly as they left your works, which speaks for itself, whilst the main bearings are as new. With regard to the big-end bolts, although these upon examination appear to be tight, would you consider it advisable to renew them ? "

We fear that the year 1915 will not see the usual turnover on sparepart account by many manufacturers. -Under pre-war conditions, it was safe to reckon upon a certain trade in spare parts during the period of any vehicle's life, and provision had to be made accordingly. Many makers have the

parts n stock which correspond to their output in previous years, but the "casualty lists" at the Front will upset all such calculations. Even the abnormal losses of spare parts which occurred in the early days of the war, for example at Amiens, will not adjust this unforeseen factor in trade during 1915 and subsequent years. Makers will do well to bear it in mind, especially at the present time when revisions of prices for the War Office are the order of the day.

An Austin lorry was recently submitted to a hill-climbing test before delivery to Spillers and Baker, Ltd., of Swansea. The test, under a load of 2 tons 16 cwt. of flour, apart from any human load, was made on Thorn Hill, which is on the Cardiff side of Caerphilly Mountains. The hill on that side is stated to have an average gradient of 1 in 7, and it is known to be distinctly more severe than the climb from the Caerphilly side. The road and weather conditions were adverse, but the Austin did so well that a second order was immediately given by the purchaser's manager, who was present. The Austin reputation for highgrade material and excellence of manufacture on the private-car side is being worthily maintained on the commercial-vehicle side, to which branch the Austin Co. has been giving an increasing measure of attention for some time past.