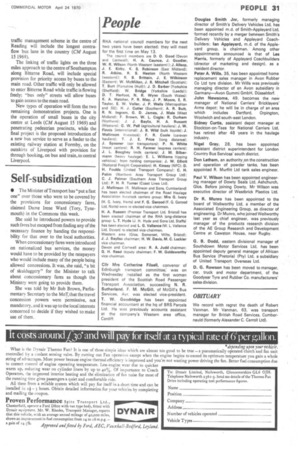 Page 33, 24th April 1970 — Self-subsidization
Close
Noticed an error?
If you've noticed an error in this article please click here to report it so we can fix it.
Keywords : British Rail, Politics

• The Minister of Transport has "put a fast one" over those who were to be covered by the provisions for concessionary fares, claimed Dame Irene Ward (Tory, Tynemouth) in the Commons this week.

She said he introduced powers to provide such fpres but escaped from finding any of the necessary finance by handing the responsibility for that over to the local authorities.

When concessionary fares were introduced on nationalized bus services, the money would have to be provided by the ratepayers who would include many of the people being allowed concessions. It was, she said, "a bit of skulduggery" for the Minister to talk about concessionary fares as though the Ministry were going to provide them.

She was told by Mr Bob Brown, Parliamentary Secretary to the MoT, that the travel concession powers were permissive, not mandatory, and it was up to the local interests concerned to decide if they wished to make use of them.