BY MOTOR FROM SILO TO MILL. 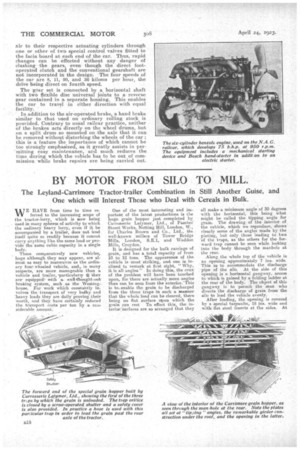 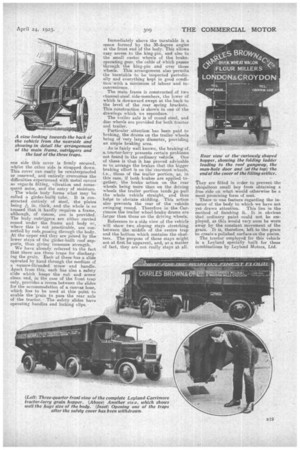 Page 16, 24th April 1923 — BY MOTOR FROM SILO TO MILL.
Close
Noticed an error?
If you've noticed an error in this article please click here to report it so we can fix it.

The Leyland-Carrimore Tractor-trailer Combination in Still Another Guise, and One which will Interest Those who Deal with Cereals in Bulk.

WE HAVE from time to time referred to the increasing scope of the tractor-lorry, which is now being used in many spheres of activity to which the ordinary heavy lorry, even if it be -accompanied by a trailer, does not lend itself quite so readily because it cannot carry anything like the same load or provide the same cubic capacity in a siegle body.

These comparatively new vehicles, huge although they may appear, are almost as easy to manceuvre as the ordinary fourwheeled vehicle, and,, in many respects, are more manageable than a vehicle and trailer, 'particularly IL they are equipped' with a. riell-thought-out braking system, such as the Weetinghouse. For work which eonstahtly involves the transport of very bulky and 'heavy loads they are daily proving their worth, and they have certainly reduced the transport costs per ton by a considerable amount. One of the most interesting and portent of the latest productions is the huge, grain hopper just completed by Carrosserie Latymer, Ltd., of Pamber Street Works, Notting Hill, London, W., Inc Charles Brown and Co., Ltd., the well-known 'millers of Tower Bridge Mills, London, S.E.1, and Waddon Mills, Croydon.

It is designed for the bulk carriage of grain, and has a total capacity of from 10 to 12 tons. The appearance of the vehicle is most striking, and one is in.dined to remark at first sight, "Why, it is all angles." In doing this, the mix of the problem will have been touched upon-, far there are actually more angles than can be seen from the exterior. This is to.enable the grain to be discharged from the three traps in such a /manner that the whole load can be cleared, there being no flat surface open which the grain ran rest To effect this, the interior surfaces are so arranged that they

all make a minimum angle of 30 degrees with the horizontal, this being what might be called the tipping angle for grain. The drawing of the interior of the vehicle, which we reproduce, shows clearly some of the angles made by the plating, but only those leading to two of the traps, as the others for the forward trap cannot be seen while looking into the body through the manhole at the rear.

Along the whole top of the vehicle is an opening approximately 7 ins. wide. This ia to accommodate the discharge pipe of the silo. At the side of this opening is a horizontal gangway, access to which is gained by a folding ladder at the rear of the body. The object of this gangway is to permit the man who directs the discharge of grain from the silo to load the vehicle evenly.

After loading, the opening is covered by a special tarpaulin, 18 ins, wide and with flat steel inserts at the sides. At one side this cover is firmly secured, whilst the other side is strapped down. This cover can easily be rewaterpreofed or renewed, and entirely overcomes the difficulties experienced with metal covers as regards fitting, vibration and consequent noise, and the entry of moisture.

The whole body forms what may he called a girder-built/ tube. It is constructed entirely of steel, the plates being in. thick, and the whole is so trussed that it, hardly requires a frame, although, of coarse, one is provided. The body outriggers are either carried round under the frame and body or, Where this is not practicable, are conneeted by rods,passing through the body. At the upper end they are joined by the lower stays of the girder-built roof supports, thus giving immense strength. We have already referred to the fact that there are three traps for discharging the grain. Each of these has a slide operated by hand through the medium of a square-threaded screw and handle. Apart from this, each has also a safety slide which keeps the nut andscrew .clean and, in the case of the front trap only, provides a recess between the slides for the accommodation of a canvas hose, which has to be used at this -point to enable the 'grain to pass the rear axle of the tractor. The safety slides have operating handles and locking clips. Immediately above the turntable is a space formed by the 30-degree angles at the front end of the body. this allows easy access to the king-pin, and also to the small castor wheels of thet brakeoperating gear, the. cable of which passes through the king-pin and over these wheels. This arrangement also permits the turntable to be inspected periodically and everything kept in good condition'with a minimum of labour and inconvenience.

The main frame is constructed of. two channel-steel side-members, the lower of which is downward swept at the back. to the level of the rear spring brackets. This &instruction is shown in one of the drawings which we reprodece. , The trailer axle is of round steel, and disc wheels are provided for both tractor and trailer.

Particular attention has been paid to braking; the drurris on the trailer wheels being of very large diameter, providing an ample braking area.

As is fairly well known, the braking of, a. tractor-lorry presents certain problems not found in the ordinary vehicle. One of these is that it. has proved advisable so to arrange the brakes -that the bigger braking effort is on the rearmost wheels, i.e., those of the trailer portion, as, in this case, if both 'brakes are applied together, the brake action on the rear wheels being more than on the driving wheels the trailer portion tends pull the whale vehicle straight, and thus helps to obviate skidding. This action also prevents the rear of the vehicle swinging round, Therefore in the Carrimore the trailer wheel-brake drums are -larger than those on the driving wheels.

Reference to a side view of the vehicle will show two sloping stays stretching between the middle of the centre trap and the bottom which contains the shutters. The purpose of these stays might not at first be apparent, and, as a matter of fact, they are not really stays at all. They are fitted in order to prevent the ubiquitous small boy from obtaining a free ride on what would otherwise be a most promising form of seat. There is one feature regarding the interior of the body to which we have not

yet drawn attention. This lies in the method of finishing it. It, is obvious that ordinary paint could not be employed, as this would very soon he worn away by the constant movement of the grain. It is, therefore, left to the grain to create a polished surface on the plates.

The tractor employed for this• vehicle is a Leyland specially built for these combinations by Leyland Motors, Ltd.