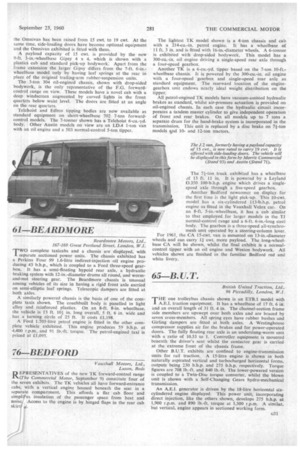 Page 148, 23rd September 1960 — 71 AUSTIN
Close
Noticed an error?
If you've noticed an error in this article please click here to report it so we can fix it.

FOUR of the nine vehicles exhibited have not been seen before at Earls Court. These are the completely new 14 10-12-cwt. van, the long-wheelbase version of the Series 11 Gipsy 4 x 4, the 304 forward-control 3-tonner and the Seven 5-cwt. van.

The 7.4 10:12-cwt. van (shown also by Morris-Commercial) has a 1.489-litre engine and a four-speed gearbox. Integral construction is employed for the body shell and the vehicle has independent front suspension by wishbones and coil springs, Load space of 160 Cu. ft is reached by double rear doors. The forward-control van can have sliding or hinged cab doors and the two models shown will be fitted with these alternatives.

Features of the Seven 5-cwt. van are already well known. They include a transverse engine driving the front wheels and all-round independent suspension with rubber springs. The engine has a capacity of only 848 c.c., but, because of the low unladen weight, it provides performance well up to the standard of more conventional models of similar payload capacity.

With the introduction of the 7.4, the payload rating of the Omnivan has been raised from 15 cwt. to 19 cwt. At the same time, side-loading doors have become optional equipment and the Omnivan exhibited is fitted with them.

A payload capacity of 15 cwt. is provided by the new 9-ft. 3-in.-wheelbase Gipsy 4 x 4, which is shown with a plastics cab and standard pick-up bodywork: Apart from the frame extension the larger Gipsy differs from the 7-ft. 6-in.wheelbase model only by having leaf springs at the rear in place of the original trailing-arm rubber-suspension units.

The 3-ton 304 oil-engined chassis, shown with drop-sided bodywork, is the only representative of the F.G. forwardcontrol range on view. These models have a novel cab with a deep windscreen augmented by curved lights in the front quarters below waist level. The doors are fitted at an angle on the rear quarters.

Telehoist and Edbro tipping bodies are now available as standard equipment on short-wheelbase 702 7-ton forwardcontrol models. The 7-tonner shown has a Telehoist 6-cu.-yd. body. Other Austin models on view are an LD.4 1-ton van with an oil engine and a 503 normal-control 5-ton tipper. The lightest TK model shown is a 4-ton chassis and cab with a 214-cu.-in, petrol engine. It has a wheelbase of 11 ft. 3 in. and is fitted with 16-in.-diameter wheels. A 6-tonner is exhibited with drop-sided bodywork. This model has a 300-cu.-in. oil engine driving a single-speed rear axle through a four-speed gearbox.

Another TK is a 6-cu.-yd. tipper based on the 7-ton 10-ft.wheelbase chassis. It is powered by the 300-cu.-in. oil engine with a four-speed gearbox and single-speed rear axle as standard equipment. The rearward location of the enginegearbox unit endows nearly ideal weight distribution on the tipper.

All petrol-engined TK models have vacuum-assisted hydraulic brakes as standard, whilst air-pressure actuation is provided on oil-engined chassis. In each case the hydraulic circuit incorporates a tandem master cylinder to give independent operation of front and rear brakes. On all models up to 7 tons a separate drum for the hand-brake system is incorporated in the transmission. This unit is replaced by a disc brake on 7+-ton models ind 10and 12-ton tractors.