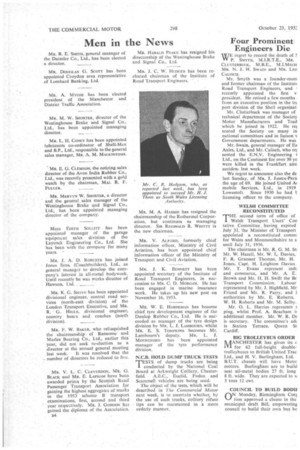 Page 38, 23rd October 1953 — Men in the News
Close
Noticed an error?
If you've noticed an error in this article please click here to report it so we can fix it.
Keywords : G

MR, R. E. SMITH, general manager of the Daimler Co., Ltd., has been elected a director.

MB. A. MYCOE has been elected president of the Manchester and District Traffic Association.

MR. MERVYN W. SHORTER, a director and the general sales manager of the Westinghouse Brake and Signal Co., Ltd., has been appointed managing director of the company.

MISS EDITH SOLLITThas been appointed manager of the garage equipment sales division of the Laycock Engineering Co., Ltd. She has been with the company for many years.

Ma. J. A. D. ROBERTS has joined Jones Bros. (Coachbuilders), Ltd., as general manager to develop the company's interest in all-metal bodywork. Until recently he was works director of Hawson, Ltd.

MR. F. W. BAKER, who relinquished the chairmanship. of Ransome and Manes Bearing Co., Ltd., earlier this year, did not seek re-election as a director at the annual general meeting

last week. It was resolved that the number of directors be reduced to five.

MR. HARALD PEAKE has resigned his directorship of the Westinghouse Brake and Signal Co., Ltd.

MR, J. C. W. HEDGES has been reelected chairman of the Institute of Road Transport Engineers.

MR. M. A. HASSID has resigned the chairmanship of the Rothermel Corporation, but continues as managing director. SIR REGINALD R. WEHTTY is the new chairman.

MR. J. K. BF.NNETT has been appointed secretary of the Institute of Road Transport Engineers, in succession ID MR. C. D. MORGAN. He has been engaged in marine insurance work. He takes up his new post on November 16, 1953.

N.C.B. HOLD DUMP TRUCK TESTS TESTS of dump trucks are being conducted by the National Coal Board at Arkwright Colliery, Chester field. A.E.C., Foden and Scammell vehicles are being "used: The object of the tests, which will be described in The Commercial Motor next week, is to ascertain whether., by the use of such trucks, colliery refuse tips can be maintained in a more orderly manner.