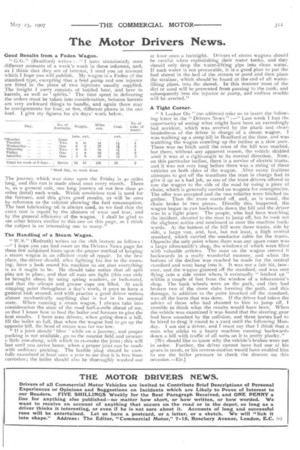 Page 29, 23rd May 1907 — The Motor Drivers News.
Close
Noticed an error?
If you've noticed an error in this article please click here to report it so we can fix it.

Good Results from a Foden Wagon.

" G.G." (Bradford) writes :—" I have occasionally seen different accounts of a week's work in these columns, and, as I think that they are of interest, I send you an account which I hope you will publish. My wagon is a Foden of the standard type, excepting that a feed pump and one injector are fitted in the place of two injectors usually supplied. The freight I carry consists of bottled beer, and beer in barrels, as well as spirits.' The time spent in delivering the orders must be taken into consideration, because barrels are very awkward things to handle, and again there may be consignments for four, or five, different places in the one load. I give my figures for -six days' work below.

The journey which was done upon the Friday is 40 miles long, and this run is made about once every month. There is, as a general rule, one long journey of not less than 40 miles (total) each week. Welsh smokeless coal is used for the furnace, and this gives good results, as will be seen by reference to the column showing the fuel consumption. The best lubricating oil is always used, as we find that the extra cost is repaid by the absence of wear and tear, and by the general efficiency of the wagon. I shall be glad to see other letters similar to this one on this page, as I think the subject is an interesting one to many,"

The Handling of a Steam Wagon.

" W.S." (Redruth) writes on the iSth instant as follows ; --" I hope you can find room on the Drivers News page for these few subjoined hints upon the proper method of keeping a steam wagon in an efficient state of repair. In the first place, the driver should, after lighting his fire in the morning, have a look round his machine to see that everything is as it ought to be. He should take notice that all split pins are in place, and that all nuts are tight (this can only be brought about by using spring washers, or lock-nuts), and that the oilcups and grease cups are filled. At each stopping point throughout a day's work, it pays to have a general look around, and with practice a good driver notices almost mechanically anything that is not in its normal state. When running a steam wagon, I always take into consideration the state of the road half-a-mile ahead of me, so that I know how to feed the boiler and furnace to give the best results. I have seen drivers, when going down a hill, fill the boiler so full, that when the wagon had to go up the opposite hill, the head of steam was far too low.

" If a joint should blow while on a journey, and proper packing is not available, go to the nearest field and procure a little cow-dung, with which to re-make the joint ; this will last until you arrive home, when a proper joint can be made with ordinary packing. The fusible plug should be carefully examined at least once a year to see that it is free from corrosion; the boiler should also be thoroughly washed out at least once a fortnight. Drivers of steam wagons should be careful when replenishing their water tanks, and they should only drop the water-lifting pipe into clean water. If such water is not procurable, it is a good plan to put the fuel shovel in the bed of the stream or pond and then place the strainer, which should be found at the end of all waterlifting pipes, into the shovel. In this manner most of the dirt or sand will be prevented from passing to the tank, and subsequently into the injector or pump, and endless trouble will be averted."

" A Looker On " (no address) asks us to insert the following letter in the " Drivers News " :—" Last week I had the opportunity of seeing what might have been an exceedingly bad accident, which was averted by the pluck and clearheadedness of the driver in charge of a steam wagon. I was walking up a steep hill in Bradford at the time, and was watching the wagon crawling up the incline at a slow pace. There was no hitch until the crest of the hill was reached, but there, without any apparent reason, the vehicle skidded until it was at a right-angle to its normal direction. Now, on this particular incline, there is a service of electric trams, and it was not very long before there was a string of these vehicles on both sides of the wagon. _After many fruitless attempts to get off the tramlines the man in charge had to give it up as a bad job, so one of the tram drivers offered to tow the wagon to the side of the road by using a piece of chain, which is generally carried on wagons for emergencies. The offer was accepted and the two vehicles were hitched together. Then the tram started off, and, as is usual, the chain broke in two pieces. Directly this happened, the wagon began to run backwards down the hilt and the driver was in a tight place. The people, who had been watching the incident, shouted to the man to jump off, but he took not the slightest notice and continued to steer the machine backwards. At the bottom of the hill were three trams, side by side, a large van, and, last, but not least, a high central standard, which carried the conductor cable for the trams. Opposite the only point where there was any spare room was a large silversmith's shop, the windows of which were filled with valuable articles. The man on the wagon steered it backwards in a really wonderful mariner, and when the bottom of the decline was reached he made for the central standard and went bang into it. It was not a fair hit, however, and the wagon glanced off the standard, and was sent flying into a side street where it eventually " fetched up " within a couple of feet from the window of a tobacconist's shop. The back wheels were on the path, and they had broken two of the stone slabs forming the path, and this damage, in addition to the paint knocked ofT the standard, was all the harm that was done. If the driver had taken the advice of those who had shouted to him to jump off, tremble to think what the results would have been. When the vehicle was examined it was found that the steering gear had been smashed by the collision, and three horses had to be hired to drag it round to a yard until the following Monday. I am not a driver, and T must say that I think that a man who sticks to a heavy machine running backwards down a hill with traffic of all sorts on it is pretty plucky."

[We should like to know why the vehicle's brakes were not in order. Further, the driver cannot have had one of his gears in mesh, or his reverse-motion would have enabled him to use the boiler pressure to check the descent on this occasion.—ED.]