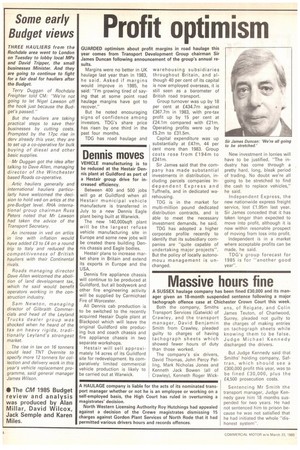 A SUSSEX haulage company has been fined £30,000 and its manager given an 18-month suspended sentence following a major tachograph offence case at Chichester Crown Court this week.

Both the company, Smiths Transport Services (Gatwick) of Crawley, and the transport manager, David Benjamin Smith from Crawley, pleaded guilty to charges of having tachograph sheets which showed fewer hours of duty than those worked.

The company's six drivers, David Thomas, John Percy Pelling, Mark Nicholas Jones and Kenneth Jack Bowen (all of Crawley), Kenneth Roger Wick ens, of Reigate, and Colin James Teuton, of Charlwood, Surrey, pleaded not guilty to the charges of making entries on tachograph sheets while knowing them to be false. Judge Michael Kennedy discharged the drivers.

Sentencing Mr Smith the transport manager, Judge Kennedy gave him 18 months suspended for two years. He had not sentenced him to prison because he was not satisfied that he had initiated the whole "dishonest system".