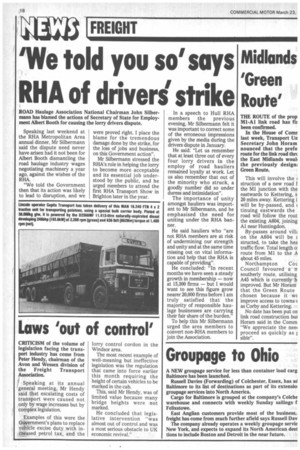 Page 20, 23rd March 1979 — Midlands 'Green Route'
Close
Noticed an error?
If you've noticed an error in this article please click here to report it so we can fix it.
Keywords : Kettering, Horam, Wealden, Corby, Roads In England, Hospitality / Recreation, Environment

THE ROUTE of the prop MI-Al link road has fir been confirmed.

This will involve the r struction of a new road f the MI junction with the eastwards to Kettering, s 20 miles away. Kettering i will be by-passed, and ( tinuing eastwards the road will follow the rout the existing A604, joining Al near Huntingdon.

By-passes around vilh on the A604 will be structed, to take the hea traffic flow. Total length o: route from MI to the A about 45 miles.

Northampton Cot Council favoured a n southerly route, utilising A45 which is currently b improved. But Mr Horam that the Green Route chosen because it NAT( improve access to towns as Corby and Kettering.

No date has been put on link road construction but Horam said in the Comm "We appreciate the neer proceed as quickly as sible".