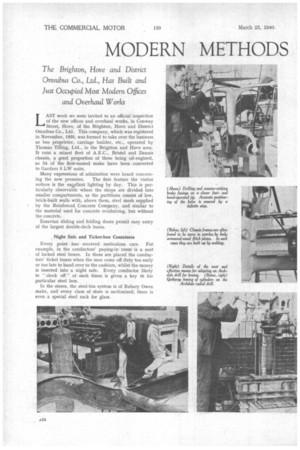 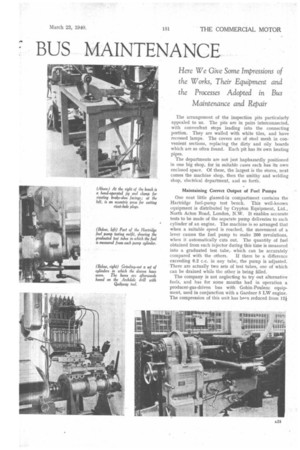 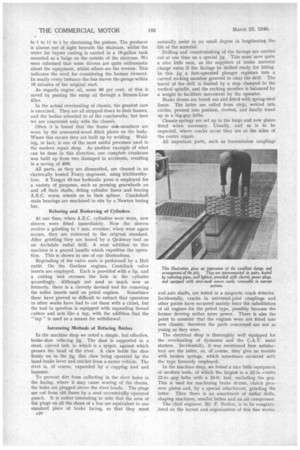 LAST week we were invited to an official inspection of the new offices and overhaul works, in Conway Street, Hove, of the Brighton, Hove and District Omnibus Co., Ltd. This company, which was registered in November, 1935, was formed to take over the business as bus proprietor, carriage builder, etc., operated by Thomas Tilling, Ltd., in the Brighton and Hove area. It runs a mixed fleet of A.E.C., Bristol and Dennis chassis, a good proportion of these being oil-engined, as 54 of the first-named make have been converted to Gardner 5 LW units.

Many expressions of admiration were heard concern

ing the new premises. The first feature the visitor notices is the enellent lighting by day. This is particularly observable where the shops are divided into smaller compartments, as the partitions consist of low, brick-built wails with, above them, steel mesh supplied

. by the Reinforced, Concrete Company, and similar to the material used for concrete reinforcing, but without the concrete.

. Night Safe and Ticket-box Containers Every point has received meticulous care. For example, in the conductors' paying-in room is a nest of locked steel boxes. In these are placed the conductors' ticket boxes when the men come off duty too early or too late to hand over to the cashiers, whilst the money is inserted into a night safe. Every conductor likely to "clock off" at such times is given a key to his particular steel box.

In the stores, the steel-bin system is of Rubety Owen make, and every class of store is sectionized; there is even a special steel rack for glass.

The arrangement of the inspection pits particularly appealed to us. The pits are in pairs interconnected, with convenient steps leading into the connecting portion. They are walled with white tiles, and have recessed lamps. The covers are of steel mesh in convenient sections, replacing the dirty and oily boards which are so often found. Each pit has its own heating pipes.

The departments are not just haphazardly positioned in one big shop, for in suitable cases each has its own enclosed space. Of these, the largest is the stores, next comes the machine shop, then the smithy and welding shop, electrical department, and so forth.

One neat little glassed-in compartment contains the Hartridge fuel-pump test bench. This well-known equipment is distributed by Crypton Equipment, Ltd., North Acton Road, London, N.W. It enables accurate tests to be made of the separate pump deliveries to each cylinder of an engine. The machine is so arranged that when a suitable speed is reached, the movement of a lever causes the fuel pump to make 200 revolutions, when it automatically cuts out. The quantity of fuel obtained from each injector during this time is measured into a graduated test tube, which can be accurately compared with the others. If there be a difference exceeding 0.2 c.c. in any tube, the pump is adjusted. There are actually two sets of test tubes, one of which can be drained while the other is being filled.

The company is not neglecting to try out alternative fuels, and has for some months had in operation a producer-gas-driven bus with Gohin-Poulenc equipment, used in conjunction with a Gardner 5 LW engine. The compression of this unit has beeli reduced from 1.2i to 1 to 11 to 1 by shortening the pistons. The producer is almost out of sight beneath the staircase, whilst the water for tuyere cooling is carried in a 10-gallon tank mounted as a bulge on the outside of the staircase. We were informed that some drivers are quite enthusiastic about the equipment, whilst others are the reverse. This indicates the need for considering the human element. In nearly every instance the bus leaves the garage within 10 minutes of the original start.

As regards engine oil, some 80 per cent, of this is saved by passing the sump oil through a Stream-Line filter.

In the actual overhauling of chassis, the greatest care is exercised. They are all stripped down to their frames, and the bodies attended to at the coachworks, but here we are concerned only with the chassis.

Often it is found that the frame side-members are worn by the armoured-wood flitch plates on the body. Where this occurs they are built up by welding. Welding, in fact, is one of the most useful processes used in the modern repair shop. As another example of what can be done in this direction, one complete crankcase was built up from two damaged in accidents, resulting in a saving of £60.

All parts, as they are dismantled, are cleaned in an electrically heated Foxry degreaser, using trichlorethyIene. A Tangye 45-ton hydraulic press is employed for a variety of purposes, such as pressing gearwheels on and off their shafts, fitting cylinder liners and forcing A.E.C. worm wheels on to their splines. Crankshaft main bearings are machined in situ by a Newton boring bar.

Reboring and Resleeving of Cylinders

At one time, when A.E.C. cylinders were worn, new sleeves were fitted immediately. Now the sleeves receive a grinding to 1 mm. oversize; when wear again occurs, they are resleeved to the original standard. After grinAing they are honed by a Quikway toot on an Archdale radial drill_ A neat addition to this machine is a geared handle which expedites the operation. This is shown in one of our illustrations.

Regrinding of the valve seats is performed by a Hall outfit. On the Gardner engines, Centrilock valve inserts are employed. Each is provided with a lip, and a cutting tool recesses the hole in the cylinder accordingly. Although not used so much now as formerly, there is a cleverly devised tool for removing the softer inserts used on petrol engines. Sometimes these have proved so difficult to extract that operators in other works have had to cut them with a chisel, but the tool in question is equipped with expanding thread cutters and acts like a tap, with the addition that the " tap" is used as a means for withdrawal.

Interesting Methods of Refacing Brakes In the machine shop we noted a simple, but effective, brake-shoe refacing jig. The shoe is supported in a stout, curved bed, in which is a spigot, against which presses the head of the rivet. A claw holds the shoe firmly on to the jig, this claw being operated by the hand-brake lever and ratchet from a motor vehicle. The rivet is, of course, expanded by a cupping tool and hammer.

To prevent dirt from collecting in the rivet holes in the facing, where it may cause scoring of the drums, the holes are plugged above the rivet heads. The plugs are cut from old liners by a neat eccentrically operated punch. It is rather interesting to note that the area of the plugs on all the shoes of a bus are equivalent to one standard piece of brake facing, so that they must A2e naturally assist in no small degree in lengthening the life of the material.

Drilling and countersinking of the facings-. are carried out at one time on a special jig. This must save quite a nice little sum, as the suppliers of brake material charge extra if the facings be drilled ready for fitting. In this jig a foot-operated plunger registers into a curved rocking member grooved to clear the drill. The travel of the drill is limited by a stop clamped to the vertical spindle, and the rocking member is balanced by a weight to facilitate movement by the operator.

Brake drums are bored out and fitted with spring-steel liners. The latter are rolled from strip, welded into circles, pressed into position, riveted, and finally trued up in a big-gap lathe.

Chassis springs are set up in the forge and new plates fitted when necessary. Usually, and as is to be expected, where cracks occur they are at the sides of the centre nipple.

All important parts, such a5 transmission couplings and axle shafts, are tested in a magnetic crack detector. Incidentally, cracks in universal-joint couplings and other points have occurred mainly since the substitution of oil engines for the petrol type, possibly because the former develop rather more power. There is also the point to consider that the engines were not fitted into new chassis; therefore the parts concerned are not so young as they were.

The electrical shop is thoroughly well equipped for the overhauling of dynamos and the C.A.V. axial starters. Incidentally, it was mentioned how satisfactory are the latter, as, of course, they give no trouble with broken springs, which sometimes occurred with the type formerly employed..

In the machine shop, we found a nice little equipment of modern tools, of which the largest is a 12-in.-centre 22-in.-gap lathe with a 10-ft bed, excluding the gap. This is used for machining brake drums, clutch pressure plates and, by a special attachment, grinding the latter. Then there is an assortment of radial drills, shaping machines, smaller lathes and an air compressor.

The chief engineer, Mr. P. Button, is to be congratulated on the layout and organization of this fine works.