Selling up — moving on 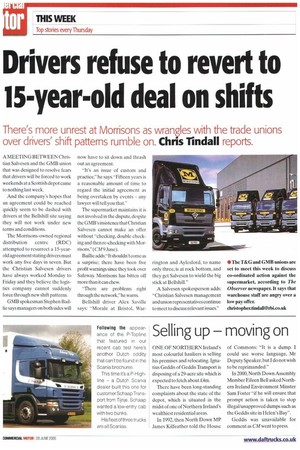 Page 10, 23rd June 2005 — Selling up — moving on
Close
Noticed an error?
If you've noticed an error in this article please click here to report it so we can fix it.
Keywords : Geddis, Eileen Bell, Down, Environment

ONE OF NORTHERN Ireland's most colourful hauliers is selling his premises and relocating. Ignatius Geddis of Geddis Transport is disposing of a 29-acre site which is expected to fetch about &Int.

There have been long-standing complaints about the state of the depot, which is situated in the midst of one of Northern Ireland's wealthiest residential areas.

In 1992, then North Down MP James Kilfeather told the House of Commons: "It is a dump. I could use worse language, Mr Deputy Speaker, but I do not wish to be reprimanded."

In 2000, North Down Assembly Member Eileen Bell asked Northern Ireland Environment Minster Sam Foster "if he will ensure that prompt action is taken to stop illegal/unapproved dumps such as the Geddis site in Helen's Bay".

Geddis was unavailable for comment as CM went to press.