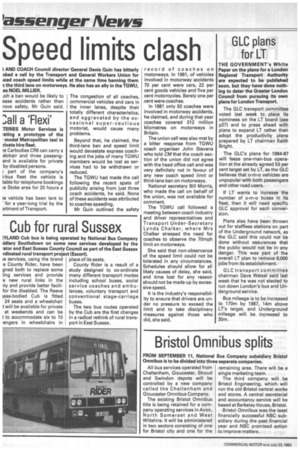 Page 16, 23rd July 1983 — Bristol Omnibus splits
Close
Noticed an error?
If you've noticed an error in this article please click here to report it so we can fix it.

FROM SEPTEMBER 11, National Bus Company subsidiary Bristol Omnibus is to be divided into three separate companies.

All bus services operated from Cheltenham, Gloucester, Stroud and Swindon depots will be controlled by a new company called the Cheltenham and Gloucester Omnibus Company.

The existing Bristol Omnibus title is being retained for a company operating services in Avon, North Somerset and West Wiltshire. It will be administered in two sectors consisting of one for Bristol city and one for the remaining area. There will be a single marketing team.

The third company will be Bristol Engineering, which will run the old Bristol central works and stores. A central secretarial and accountancy service will be based at Berkeley House, Bristol.

Bristol Omnibus was the least financially successful NBC subsidiary during the past financial year and NBC promised action to improve matters.