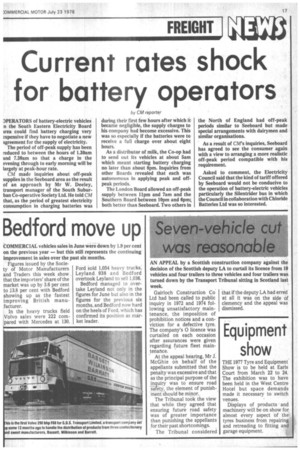 by CM reporter JPERATORS of battery-electric vehicles n the South Eastern Electricity Board area could find battery charging very xpensive if they have to negotiate a new agreement for the supply of electricity.

The period of off-peak supply has been reduced to between the hours of 1.30am and 7.30am so that a charge in the evening through to early morning will be largely at peak-hour rate.

CM made inquiries about off-peak supplies in the Seeboard area as the result of an approach by Mr W. Deeley, transport manager of the South Suburban Co-operative Society Ltd. He told CM that, as the period of greatest electricity consumption in charging batteries was during their first few hours after which it became negligible, the supply charges to his company had become excessive. This was so especially if the batteries were to receive a full charge over about eight hours.

As a distributor of milk, the Co-op had to send out its vehicles at about 5am which meant starting battery charging no later than about 8pm. Inquiries from other Boards revealed that each was autonomous in applying peak and offpeak periods.

The London Board allowed an off-peak supply between 1 lpm and 7am and the Southern Board between lOpm and 6pm;, both better than Seeboard. Two others in the North of England had off-peak periods similar to Seeboard but made special arrangements with dairymen and similar organisations.

As a result of CM's inquiries, Seeboard has agreed to see the consumer again with a view to arranging a more realistic off-peak period compatible with his requirement.

Asked to comment, the Electricity Council said that the kind of tariff offered by Seeboard would not be conducive to the operation of battery-electric vehicles particularly the Silentrider bus in which the Council in collaboration with Chloride Batteries Ltd was so interested.