The secret of agile trailers: how ETS works 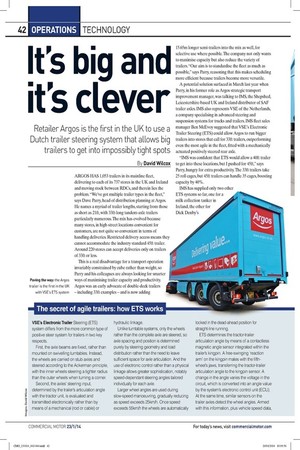 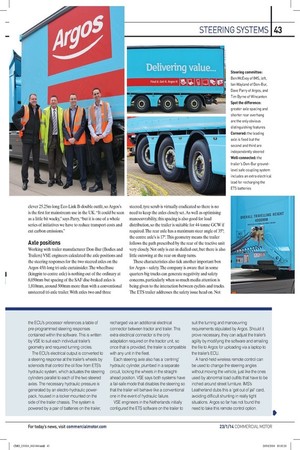 Page 39, 23rd January 2014 — The secret of agile trailers: how ETS works
Close
Noticed an error?
If you've noticed an error in this article please click here to report it so we can fix it.

First, the axle beams are fixed, rather than mounted on swivelling turntables. Instead, the wheels are carried on stub axles and steered according to the Ackerman principle, with the inner wheels steering a tighter radius than the outer wheels when turning a corner. Second, the axles' steering input, determined by the trailer's articulation angle with the tractor unit, is evaluated and transmitted electronically rather than by means of a mechanical (rod or cable) or

Unlike turntable systems, only the wheels rather than the complete axle are steered, so axle spacing and position is determined purely by steering geometry and load distribution rather than the need to leave sufficient space for axle articulation. And the use of electronic control rather than a physical linkage allows greater sophistication, notably speed-dependant steering angles tailored individually for each axle. Larger wheel angles are used during slow-speed manoeuvring, gradually reducing as speed exceeds 25km/h. Once speed exceeds 55km/h the wheels are automatically

locked in the dead-ahead position for straight-line running. ETS determines the tractor-trailer articulation angle by means of a contactless magnetic angle sensor integrated within the trailer's kingpin. A free-swinging 'reaction arm' on the kingpin mates with the fifthwheel's jaws, transferring the tractor-trailer articulation angle to the kingpin sensor. A change in the angle varies the voltage in the circuit, which is converted into an angle value by the system's electronic control unit (ECU). At the same time, similar sensors on the trailer axles detect the wheel angles. Armed with this information, plus vehicle speed data,

the ECU's processor references a table of pre-programmed steering responses contained within the software. This is written by VSE to suit each individual trailer's geometry and required turning circles. The ECU's electrical output is converted to a steering response at the trailer's wheels by solenoids that control the oil flow from ETS's hydraulic system, which actuates the steering cylinders parallel to each of the two steered axles. The necessary hydraulic pressure is generated by an electro-hydraulic powerpack, housed in a locker mounted on the side of the trailer chassis. The system is powered by a pair of batteries on the trailer,

Each steering axle also has a 'centring' hydraulic cylinder, plumbed in a separate circuit, locking the wheels in the straightahead position. VSE says both systems have a fail-safe mode that disables the steering so that the trailer will behave like a conventional one in the event of hydraulic failure. VSE engineers in the Netherlands initially configured the ETS software on the trailer to

suit the turning and manoeuvring requirements stipulated by Argos. Should it prove necessary, they can adjust the trailer's agility by modifying the software and emailing the file to Argos for uploading via a laptop to the trailer's ECU.

A hand-held wireless remote control can be used to change the steering angles without moving the vehicle, just like the ones used by abnormal load outfits that have to be inched around street furniture. IMS's Leatherland dubs this a 'get out of jail' card, avoiding difficult shunting in really tight situations. Argos so far has not found the need to take this remote control option.