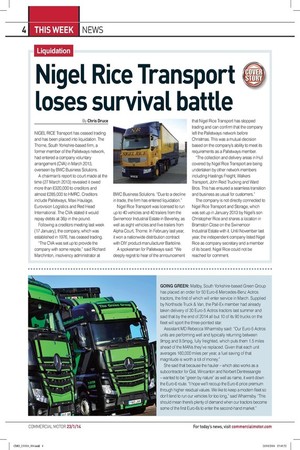 Page 3, 23rd January 2014 — Nigel Rice Transport Loses survival battle
Close
Noticed an error?
If you've noticed an error in this article please click here to report it so we can fix it.

NIGEL RICE Transport has ceased trading and has been placed into liquidation. The Thorne, South Yorkshire-based firm, a former member of the Palletways network, had entered a company voluntary arrangement (CVA) in March 2013, overseen by BWC Business Solutions.

A chairman's report to court made at the time (27 March 2013) revealed it owed more than £320,000 to creditors and almost £285,000 to HMRC. Creditors include Palletways, Maxi Haulage, Eurovision Logistics and Red Head International. The CVA stated it would repay debts at 36p in the pound.

Following a creditors meeting last week (17 January), the company, which was established in 1976, has ceased trading. "The CVA was set up to provide the company with some respite," said Richard Marchinton, insolvency administrator at

BWC Business Solutions. "Due to a decline in trade, the firm has entered liquidation."

Nigel Rice Transport was licensed to run up to 40 vehicles and 40 trailers from the Swinemoor Industrial Estate in Beverley, as well as eight vehicles and five trailers from Alpha Court, Thorne. In February last year, it won a nationwide distribution contract with DIY product manufacturer Bartoline. A spokesman for Palletways said: "We deeply regret to hear of the announcement

that Nigel Rice Transport has stopped trading and can confirm that the company left the Palletways network before Christmas. This was a mutual decision based on the company's ability to meet its requirements as a Palletways member.

"The collection and delivery areas in Hull covered by Nigel Rice Transport are being undertaken by other network members including Hastings Freight, Walkers Transport, John Reid Trucking and Ward Bros. This has ensured a seamless transition and business as usual for customers."

The company is not directly connected to Nigel Rice Transport and Storage, which was set up in January 2013 by Nigel's son Christopher Rice and shares a location in Bramston Close on the Swinemoor Industrial Estate with it. Until November last year, the independent company listed Nigel Rice as company secretary and a member of its board. Nigel Rice could not be reached for comment.