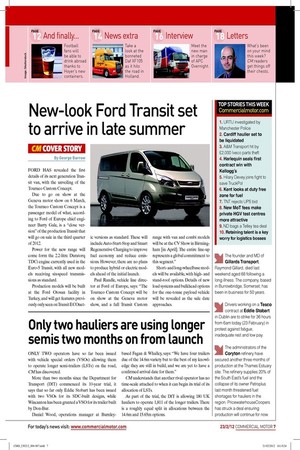 ONLY TWO operators have so far been issued with vehicle special orders (VSOs) allowing them to operate longer semi-trailers (LSTs) on the road, CM has discovered.

More than two months since the Department for Transport (DfT) commenced its 10-year trial, it says that so far only Eddie Stobart has been issued with two VSOs for its SDC-built designs, while Wincanton has been granted a VSO for its trailer built by Don-Bur.

Daniel Wood, operations manager at Burnley based Fagan & Whalley, says: “We have four trailers due of the 14.6m variety but to the best of my knowledge they are still in build, and we are yet to have a conirmed arrival date for them.” CM understands that another rival operator has no time-scale attached to when it can begin its trial of its allocation of LSTs.

As part of the trial, the DfT is allowing 180 UK hauliers to operate 1,811 of the longer trailers. There is a roughly equal split in allocations between the 14.6m and 15.65m options.