PRE PLANNING is an essential factor in administering any business 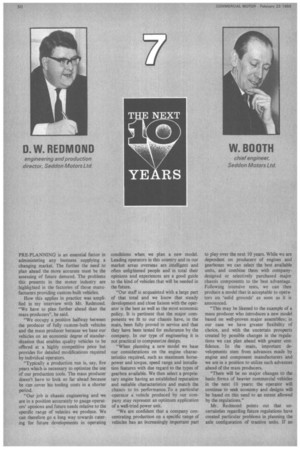 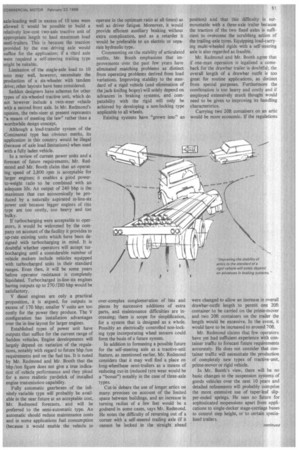 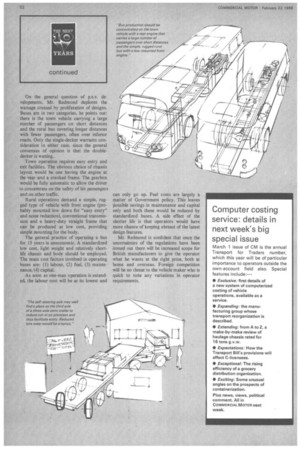 supplying a changing market. The further the need to plan ahead the more accurate must be the assessing of future demand. The problems this presents in the motor industry are highlighted in the factories of those manufacturers providing custom-built vehicles.

How this applies in practice was amplified in my interview with Mr. Redmond. "We have to plan further ahead than the mass producers", he said, "We occupy a position halfway between the producer of fully custom-built vehicles and the mass producer because we base our vehicles on an economic degree of standardization that enables quality vehicles to be offered at a highly competitive price but provides for detailed modifications required by individual operators.

"Typically a production run is say, five years which is necessary to optimize the use of our production tools. The mass producer doesn't have to look so far ahead because he can cover his tooling costs in a shorter period.

"Our job is chassis engineering and we are in a position accurately to gauge operators' opinions and future needs relative to the specific range of vehicles we produce. We can therefore go a long was towards catering for future developments in operating

conditions when we plan a new model. Leading operators in this country and in our market areas overseas are intelligent and often enlightened people and in total their opinions and experiences are a good guide to the kind of vehicles that will be needed in the future.

"Our staff is acquainted with a large part of that total and we know that steady development and close liaison with the operator is the best as well as the most economic policy. It is pertinent that the major components we fit to our chassis have, in the main, been fully proved in service and that they have been tested for endurance by the company. In our type of engineering it is not practical to computerize design.

"When planning a new model we base our considerations on the engine characteristics required, such as maximum horsepower and torque, speed range and installation features with due regard to the types of gearbox available. We then select a proprietary engine having an established reputation and suitable characteristics and match the chassis to its performance. To a particular operator a vehicle produced by our company may represent an optimum application of a well-tried power unit.

-We are confident that a company concentrating production on a specific range ot vehicles has an increasingly important part to play over the next 10 years. While we arc dependent on producery, of engines and gearboxes we can select the best available units. and combine them with companydesigned or selectively purchased major chassis components to the best advantage. Following intensive tests, we can then produce a model that is acceptable to operators on 'solid grounds' as soon as it is annou need.

"This may be likened to the example of a mass producer who introduces a new model based on well-proven major assemblies; in our case we have greater flexibility of choice, and with the uncertain prospects created by possible changes in the regulations we can plan ahead with greater confidence. In the main, important developments stem from advances made by engine and component manufacturers and we are in a position to utilize such advances ahead of the mass producers.

"There will be no major changes to the basic forms of heavier commercial vehicles in the next 10 years; the operator will continue to seek economy and designs will be based on this need to an extent allowed by the regulations."

Mr. Redmond points out that uncertainties regarding future regulations have created particular problems in planning the axle configuration of tractive units. If an axle loading well in excess of 10 tons were allowed it would be possible to build a relatively low-cost two-axle tractive unit of appropriate length to haul maximum load semi-trailers. This is because the traction provided by the one driving axle would suffice for the application; if a third axle were required a self steering trailing type might be suitable.

Limitation of the single axle load to 10 tons may well, however, necessitate the production of a six-wheeler with tandem drive; other layouts have been considered.

Seddon designers have schemes for other types of six-wheeled tractive unit, which do not however include a twin-steer vehicle with a second front axle. In Mr. Redmond's opinion, the twin-steer at present represents "a means of meeting the law" rather than a worthwhile design concept.

Although a load-transfer system of the Continental type has obvious merits, its application in this country would be illegal (because of axle load limitations) when used with a fully laden vehicle.

In a review of current power units and a forecast of future requirements, Mr. Redmond and Mr. Booth claim that an operating speed of 2,800 rpm is acceptable for larger engines: it enables a good powerto-weight ratio to be combined with an adequate life. An output of 240 bhp is the maximum that can economically be pro duced by a naturally aspirated in-line-six power unit because bigger engines of this type are too costly, too heavy and too bulky.

If turbocharging were acceptable to oper ators, it would be welcomed by the cotn pany on account of the facility it provides to up-rate existing units which have been designed with turbocharging in mind. It is doubtful whether operators will accept turbocharging until a considerable number of vehicle makers include vehicles equipped with turbocharged units in their standard ranges. Even then, it will be some years before operator resistance is completely liquidated. Turbocharged in-line-six engines having outputs up to 270/280 bhp would be satisfactory.

V diesel engines are only a practical proposition, it is argued. for outputs in excess of 170 bhp; smaller V units are too costly for the power they produce. The V configuration has installation advantages over the in-line layout for larger engines.

Established types of power unit have outputs that suffice for the current range of Seddon vehicles. Engine developments will largely depend on variation of the regulations, notably with regard to future bhp /ton requirements and on the fuel tax. It is noted by Mr. Redmond and Mr. Booth that the bhp /ton figure does not give a true indication of vehicle performance and they plead for a more realistic yardstick of installed engine transmission capability.

Fully automatic gearboxes of the infinitely variable type will probably be available in the near future at an acceptable cost, Mr. Redmond forecasts, and will be preferred to the semi-automatic type. An automatic should reduce maintenance costs and in some applications fuel consumption (because it would enable the vehicle to operate in the optimum ratio at all times) as well as driver fatigue. Moreover, it would provide efficient auxiliary braking without extra complication, and as a retarder it would be preferable to an electric or separate hydraulic type.

Commenting on the stability of articulated outfits, Mr. Booth emphasizes that improvements over the past few years have eliminated matching problems as distinct from operating problems derived from load variations. Improving stability to the standard of a rigid vehicle (and elimination of the jack-knifing bogey) will solely depend on advances in braking systems, and cornpatability with the rigid will only be achieved by developing a non-locking type applicable to all wheels.

over-complex conglomeration of bits and pieces by successive additions of extra parts, and maintenance difficulties are increasing; there is scope for simplification, for a system that is designed as a whole. Possibly an electrically controlled non-locking type incorporating wheel sensors could form the basis of a future system.

In addition to foreseeing a possible future for the self-steering axle as a tractive-unit feature, as mentioned earlier, Mr. Redmond considers that it may well find a place on Long-wheelbase semi-trailers as a means of reducing cut-in (reduced tyre wear would be a -bonus") notably in the case of three-axle types.

Cut-in debars the use of longer artics on many premises on account of the limited space between buildings, and an increase in turning radius of a few feet would be a godsend in some cases, says Mr. Redmond. He notes the difficulty of reversing out of a corner with a self-steered trailing axle (if it cannot be locked in the straight ahead position) and that this difficulty is sur mountable with a three-axle trailer because the traction of the two fixed axles is sufficient to overcome the scrubbing action of the trailing-axle tyres. Equipping load-carrying multi-wheeled rigids with a self-steering axle is also regarded as feasible.

Mr. Redmond and Mr. Booth agree that if one-man operation is legalized a comeback for the drawbar trailer is doubtful; the overall length of a drawbar outfit is too great for routine applications, as distinct from special purposes. Furthermore the combination is too heavy and costly and if employed extensively much thought would need to be given to improving its handling characteristics.

Mr. Redmond claims that few operators have yet had sufficient experience with container traffic to forecast future requirements accurately. He does not consider that container traffic will necessitate the production of completely new types of tractive-unit. prime-mover or rigid vehicle.

In Mr. Booth's view, there will be no basic changes to the suspension systems of goods vehicles over the next 10 years and detailed refinements will probably comprise the more extensive use of taper-leaf slip per ended springs. He sees no future for sophisticated suspensions apart from applications to single-decker stage-carriage buses to control step height, or to certain specia lized trailers. On the general question of p.s.v. developments. Mr. Redmond deplores the wastage created by proliferation of designs. Buses are in two categories, he points out: there is the town vehicle carrying a large number of passengers on short distances and the rural bus covering longer distances with fewer passengers, often over inferior roads. Only the single decker warrants consideration in either case, since the general consensus of opinion is that the doubledecker is waning.

Town operation requires easy entry and exit facilities. The obvious choice of chassis layout would be one having the engine at the rear and a cranked frame. The gearbox would be fully automatic to allow the driver to concentrate on the safety of his passengers and on other traffic.

Rural operations demand a simple. rugged type of vehicle with front engine (probably mounted low down for "easy entry" and noise reduction), conventional transmission and a heavy-duty straight frame that can be produced at low cost, providing simple mounting for the body.

The general practice of operating a bus for 15 years is uneconomic. A standardized low cost, light weight and relatively shortlife chassis and body should be employed. The main cost factors involved in operating buses are: (1) labour, (2) fuel, (3) maintenance, (4) capital.

As soon as one-man operation is extended, the labour cost will be at its lowest and

can only go up. Fuel costs are largely a matter of Government policy. This leaves Possible savings in maintenance and capital only and both these would be reduced by standardized buses. A side effect of the shorter life is that operators would have more chance of keeping abreast of the latest design features.

Mr. Redmond is confident that once the uncertainties of the regulations have been ironed out there will be increased scope for British manufacturers to give the operator what he wants at the right price, both at home and overseas. Foreign competition will be no threat to the vehicle maker who is quick to note any variations in operator requirements.