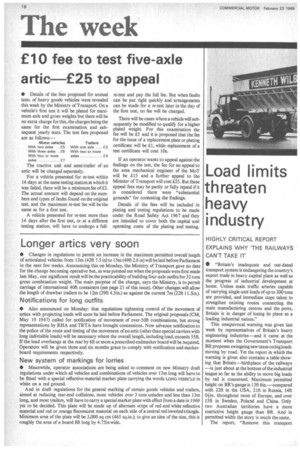 Page 20, 23rd February 1968 — Longer artics very soon
Close
Noticed an error?
If you've noticed an error in this article please click here to report it so we can fix it.

• Changes in regulations to permit an increase in the maximum permitted overall length of articulated vehicles from 13m (42ft 7.5 in) to 15m (49ft 2.6 in) will be laid before Parliament in the next few weeks. Announcing this on Monday, the Ministry of Transport gave no date for the change becoming operative but, as was pointed out when the proposals were first made last May, one significant result will be the practicability of building four-axle outfits for 32 tons gross combination weight. The main purpose of the change, says the Ministry, is to permit carriage of international 40ft containers (see page 21 of this issue). Other changes will allow the length of drawbar trailers to be 12m (39ft 4.5in.) as against the current 7m (22ft 11.5in.).

• Also announced on Monday: that regulations tightening control of the movement of artics with projecting loads will soon be laid before Parliament. The original proposals (CM, May 19 1967) called for notification of movement of over-50ft combinations, but strong representations by RHA and TRTA have brought concessions. Now advance notification to the police of the route and timing of the movement of an artic (other than special carriers with long indivisible loads) will be necessary where the overall length, including load, exceeds 55ft. If the load overhangs at the rear by 6ft or more a prescribed endmarker board will be required. Operators will be given three and six months grace to comply with notification and markerboard requirements respectively.

New system of markings for lorries • Meanwhile, operator associations are being asked to comment on new Ministry draft regulations under which all vehicles and combinations of vehicles over 13m long will have to be fitted with a special reflective-material marker plate carrying the words LONG VEHICLE in white on a red ground.

And in draft regulations for the general marking of certain goods vehicles and trailers, aimed at reducing rear-end collisions, most vehicles over 3 tons unladen and less than 13m long, and most trailers, will have to carry a special marker plate with effect from a date in 1969 yet to be decided. This plate will be made up of alternate strips of red and white reflective material and red or orange fluorescent material on each side of a central red inverted triangle. Minimum area of the plate will be 3,000 sq cm (465 sq.in.); to give an idea of the size, this is roughly the area of a board 8ft long by 4.75in wide.