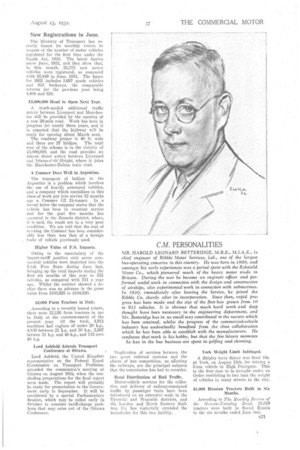 Page 39, 23rd August 1932 — New Registrations in June.
Close
Noticed an error?
If you've noticed an error in this article please click here to report it so we can fix it.
Keywords : Agricultural Machinery, Transportation, Vehicle, Commer, Tractor

'The Ministry of Transport has recently issued its Monthly return in re.spect of the number. of motor vehicles registered for the first time under the Roads Act, 1020. The latest fignres cover June, 1932, and they show that, ill this month, 23,172 new motor vehicles were registered, as compared with 23,849 in June 1931. The figure for 1932 includes 3:697goods vehicles and 613 hackneys, the comparable returns for the previous year being 4,400 and 838.

A much-needed additional traffic artery between Liverpool and Manchester will be provided by the opening of a new 26-mile road. Work has been in progress for nearly three years, and it is expected that the highway will be ready for opening about March next.

The roadway proper is 40 ft. wide

and there are 27 bridges. The total cost of the scheme is in the vicinity of £3,000,000, and the road provides an almost direct artery between Liverpool a Lid Irlams-o'-th'-Height, where it joins the Manchester-Bolton main" road.

A Coen/ter Does Well in Argentina-.

The transport of bullion in the Argentine is a problem which involves the use of heavily armoured vehicles, and a company which specializes in this class of work put into service 12 months ago a Commer G2 2i-tanner. In a recent letter the company states that the vehicle has been in constant service and for the past five months has operated in the Rosario district, where, it is said, the roads are in a very poor condition. We are told that the cost of running the Commer has been considerably less than was that of a foreign make of vehicle previously used.

Owing to the uncertainty of the import-tariff position only seven commercial vehicles were imported into the Irish Free State during June last, bringing up the total imports during the first six months of this year to 551 vehicle, as compared with 711 a year ago. Whilst the number showed a decline there was an advance in the gross value from £103,625 to £104,520.

Lord Ashfield, the United Kingdom representative on the Federal Royal Commission on Transport Problems, attended the commission's meeting at Ottawa on August 16th, when the concluding preparations for the final report were made. The report will probably be ready for presentation to the Government early in September. It will be considered by a special Parliamentary Session, which may be called early in October to consider tariff-change problems that may arise out of the Ottawa Conference. Duplication of services. between the two great railroad systems and the effects of bus competition, as affecting the railways, are the principal subjects that the commission has had to consider.

Motor-vehicle services for the collection and -delivery of railway-consigned traffic by passenger train have been introdneed on an extensive scale in the Tyneside and Wearside districts, and the London and North Eastern Railway Co. has materially extended the boundaries for this free facility. .

A Shipley lorry driver was fined 10s. at York, on August 15th, for driving a 5-ton vehicle in Lligh Petergate. This is the first case to be brought under an Order restricting to two tons the weight of vehicles in many streets in the city.

According to. The Monthly Betqew of the Motwow-Narodny Barth, 21,019 tractors were built in Soviet Russia in the six months ended June last.