The Motor Coach in Winter. 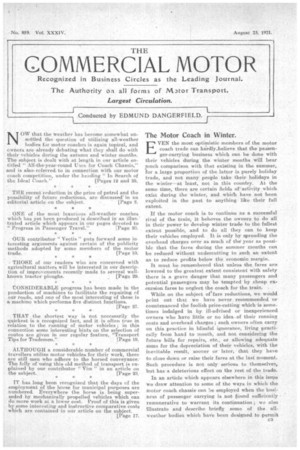 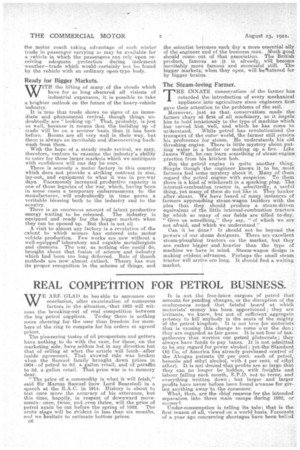 EVEN the most optimistic members of the motor coach trade can hardly,believe that the paisenger-carrying business which can be done with their vehicles during the winter months will bear much comparison with that existing in the summer, for a large proportion of the latter is purely holiday trade, and not many people take their holidays in the winter—at least, not in this country. At the same time, there are certain fields OVactivity .which exist during the winter, and which have not been exploited in the past to anything like their full extent. .

If the motor coach is to continue as a successful rival of the train, it behoves the owners to do all in their power to develop winter trade to the fullest extent possible, and to do. all they can to keep their vehicles employed. . It is only by spreading the overhead charges over as much of the year as possible that the fares during the summer months can be reduced without -undercutting 'to such an extent as to reduce profits below the economic margin.

It must be remembered that unless the fares are lowered to the greatest extent consistent with safety there is a grave danger that many passengers and potential passengers may be tempted by cheap excursion fares to neglect the coach for the train. .

While on the subject oefare reductions, we would peint out that we have never recommended or countenanced the foolish price-cutting which•is sometimes indulged in by ill-advised or inexperienced owners who have little or no. idea, of their running costs and overhead charges ; such owners often carry on this practice in blissful ignorance, living practically from hand to mouth, and not considering the future bills for repairs, etc., or allowing adequate sums for the depreciation of their vehicles, with the inevitable result, sooner or later, that they have to close down or raise their fares at the last moment. Such procedure is not only serious to themselves, but has a deleterious effect on the rest of the trade.

In an article which appears elsewhere in this issne we draw attention to some of the ways in which the motor coach, chassis can be employed when the business of passenger carrying is not found sufficiently remunerative to warrant its continuation ; we also Illustrate and describe briefly some of the allweather bodies which have been designed to permit the motor coach taking advantage of such winter trade in passenger carrying as may be available for a vehicle in which the passengers can rely upon receiving adequate protection during inclement weather—trade which would eertainly hot he found by the vehicle with an ordinary open-type body.

VV.ITH the lifting of many, of the clouds which have for so long obscured all visions of industrial expansion, it is possible to take a brighter outlook on the future of the heavy-vehicle industry. It is true that trade shows no signs of an immediate and phenomenal revival, though things .undoubtedly are " looking up." That, probably, is Just as well, because it means that the building up of trade will be on a securer basis than it has been before. Booms are all very well in. their way, but there is always an inevitable and disconcerting back

With the hope of a steady trade revival, we may, therefore, venture to examine the industry's ability to eater for those larger markets which we anticipate with confidence will one day be ours.

There is scarcely a motor factory in this country which does not provide a striking contrast in size, lay-out, and equipment to what, it was in pre-war days. Enormously increased productive capacity is one of those legacies of the war, which, having been in some cases a temporary embarrassment to the manufacturer, will undoubtedly in time prove a veritable blessing both to the industry and to the country.

There is an enormous amount of latent productive energy Waiting to be released. The industry is equipped and ready for the bigger markets when they can be opened up. But that is not all. A visit to almost any factory is a revelation of the extent to which science has entered into motor vehicle production. Few works are now without a well-equipped laboratory and capable metallurgists and chemists. The war, as nothing else could do, brought about that fusion of science and industry which had been too long deferred. Rule of thumb methods are now almost extinct. Theory has won its proper recognition in the scheme of things, and the scientist beecins,es each day a more essential ally of the engineer and of the business man. Much good should come out of that association. The British product, famous as it is already, will become inevitably more famous and successful still. The bigger markets, when they open, will betatered for by bigger brains.

HE INNATE conservatism of the farmer has retarded the introduction of every mechanical appliance into agriculture since engineers first gave their attention to the problems of the soil.

Moreover, just is that conservatism made the farmer chary at first of all machinery, so it impels him to hold tenaciously to the type of machine which has served him. well, and which he has come to urderstand." While petrol has revolutionized the transport of the outer world, the farmer still retains. his preference for steam. He understands his old threshing engine. There is little mystery about putting water in a boiler or making up a. fire. Like James Watt, he can learn something of steam-engine practice from his kitchen hob.

But the petrel engine is quite another thing. Simple though the engineer knows it to be, most farmers feel some mystery about. it. Many of them regard the petrol engine with suspicion. To them there is a kind of witchcraft in a sparking plug. The internal-combustion tractor is, admittedly, a useful thing, yet many of them do not like it. They hanker after. steam. 'We have heard of many instances of farmers approaching steam-wagon builders with the _plea that they should produce a steam-driven equivalent of the little internal-combustion tractors by which so many of our fields are tilled to-day. "Give us something," they say, "of which we are not afraid, and which we understand."

Can it be done'? It should not be beyond the powers of our steam designers. There are excellent steam-ploughing tractors on the market, but they are rather bigger and heavier than the type of machine we have in mind. Steam-wagon design is making evident advances. Perhaps the small steam tractor will arrive ere long. It should find a waiting market,