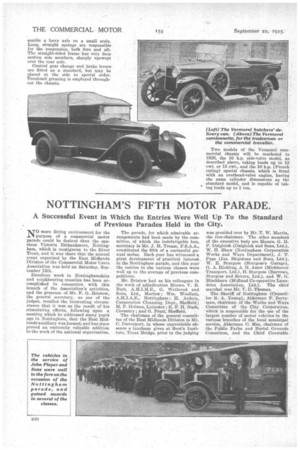 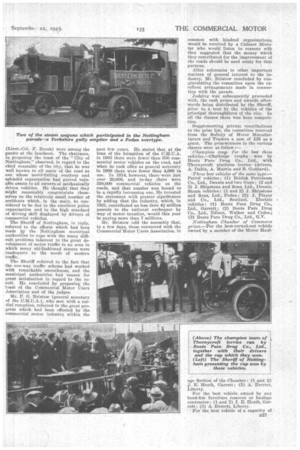 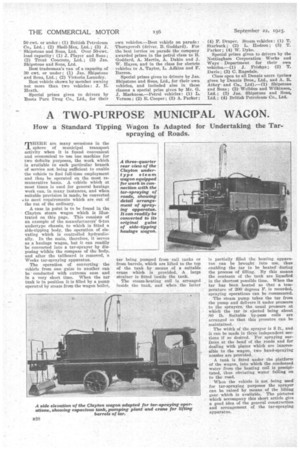 A Successful Event in Which the Entries Were Well Up To the Standard of Previous Parades Held in the City.

NO more fitting environment for the Purpose of a commercial motor parade could be desired than the spacious Victoria Embankment, Nottingham, which is contiguous to the River Trent, and it was there that the annual event organized by the East Midlands Division of the Commercial Motor Users Association was held on Saturday, September 12th.

Excellent work in Nottinghamshire and neighbouring counties has been accompliShed in connection with this branch of the Association's activities, and the presence_ of Mr. F. G. Bristow, the general secretary, as one of the judges, recalled the interesting circumstance that it was as the result of his stimulating efforts, following upon a meeting which he addressed many years ago in Nottingham, that the East Midlands auxiliary was formed, and has since proved an eminently valuable addition to the work of the national organization.

The parade, for which admirable arrangements had been made by the committee, of which the indefatigable hon. secretary is Mr. J. H. Trease, F.S.A.A., constituted the fifth of a successful annual series. Each year has witnessed a great development of practical interest in the Nottingham parade, and this year the entries in the various classes were well up to the average of previous competitions.

The Sheriff of Nottingham (Councillor R. A. Young), Alderman F. Berryman, chairman of the Works and Ways Committee of the City Corporation, which is responsible for the use of the largest number of motor vehicles in the various branches of the local municipal service, Alderman C. Mee, chairman of the Public Parks and Burial Grounds Committee, and the Chief Constable (Lieut.-Col. F. Brook) were among the guests at the luncheon. The chairman, ink proposing the toast of the "City of Nottingham," observed, in regard to the chief constable of the city, that he was well known to all users of the road as one whose nevef-failing courtesy and splendid organization had proved valuable assets to all owners of mechanically driven vehicles. He thought that they might reasonably congratulate themselves on the relatively small number or accidents which, in the main, he considered to be due to the excellent police organization and to the high standard of driving skill displayed by drivers of commercial vehicles.

The Sheriff of Nottingham, in reply, referred to the efforts which had been made by the Nottingham municipal authorities to cope with the many difficult problems inherent to the great development of motor traffic in an area in which many old-fashioned streets were inadequate to the needs of modern traffic.

The Sheriff referred to the fact that the one-way traffic scheme had worked with remarkable smoothness, and the municipal authorities had reason for great satisfaction in regard to the result. He concluded by proposing the toast of the Commercial Motor Users Association and of the judges.

Mr. F. G. Bristow (general secretary of the C.M.U.A.), who met with a cordial reception, referred to the great progress which had been effected by the commercial motor industry within the

past few years. He stated that at the time of the formation of the C.M.TJA. in 1903 there were fewer than 500 commercial motor vehicles on the road, and when he took office as general secretary in 1906 there were fewer than 4,000 In use. In 1914, however, there were just over 20,000, and to-day there were 350,000 commercial vehicles on the roads, and that number was bound to be k rapidly increasing one. He invested the statement with greater significance by adding that the industry, which, in 1921, contributed no less than 4,1 million pounds to the national exchequer by way of motor taxation, would this year be paying more than 7 millions.

Mr. Bristow told the assembly that, in a few days, those connected with the Commercial Motor Users Association, in common with kindred organizations, would be received by a Cabinet Minister who would listen to reasons whY they suggested that the money which they contributed for the improvement of the roads should be used solely for that purpose.

After references to other important matters of general interest to the industry, Mr. Bristow concluded by congratulating the committee upon the excellent arrangements made in connection with the parade.

Judging was subsequently proceeded with, the cash prizes and awards afterwards being distributed by the Sheriff, prior to a tour by the vehicles of the principal thoroughfares of the city. In all the classes there was keen competition.

Supplementing private contributions to the prize list, the committee received from the Soeiety of Motor Manufacturers and Traders a sum of £35 as a grant. The prizewinners in the various classes were as follow:— • Champion •tectin for the best three vehicles.—Challenge trophy won by Boots Pure Drug Co.; Ltd., with Thornycroft platform lorries (drivers, A. Dakin, A. Martin and B. Goddard).

Nottingham Chamber of Commerce prizes.—For the best-turned-out vehicle owned by a member of the Motor Haul

For the best vehicle owned by any bona-fide furniture remover or haulage contractor : (1 and 2) J. E. Heath, Garrett ; (3) A. Everett, Liberty.

For the best vehicle of a capacity of 1427

Special prizes given to drivers by Boots Pure Drug Co., Ltd., for their own vehicles.—Best vehicle on parade : Thornycroft (driver, B. Goddard). For the best lorries on parade the company awarded prizes in the petrol class to B. Goddard, A. Martin, A. Dakin and J. W. Hayes, and in the class for electric vehicles to A. Taylor, L. Adkins and F. Barron.

Special prizes given to drivers by the Nottingham Corporation Works and Ways Department for their own vehicles.—(1) J. Frisbys; (2) T. Davis ; (3) C. Ragsdale.