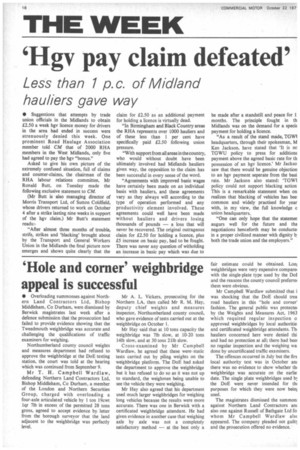 Page 18, 22nd October 1971 — `ligv pay claim defeated'
Close
Noticed an error?
If you've noticed an error in this article please click here to report it so we can fix it.
Keywords : Road Haulage Association, Labor

• Suggestions that attempts by trade union officials in the Midlands to obtain £2.50 a week hgv licence money for drivers in the area had ended in success were strenuously denied this week. One prominent Road Haulage Association member told CM that of 2000 RHA members in the West Midlands, only five had agreed to pay the hgv "bonus."

Asked to give his own picture of the extremely confused situation, full of claims and counter-claims, the chairman of the RHA labour relations committee, Mr Ronald Butt, on Tuesday made the following exclusive statement to CM.

(Mr Butt is also managing director of Morris Transport Ltd, of Sutton Coldfield, whose drivers returned to work on October 4 after a strike lasting nine weeks in support of the hgv claim.) Mr Butt's statement reads:

"After almost three months of trouble, strife, strikes and 'blacking' brought about by the Transport and General Workers Union in the Midlands the final picture now emerges and shows quite clearly that the claim for £2.50 as an additional payment for holding a licence is virtually dead.

"In Birmingham and Black Country areas the RHA represents over 1000 hauliers and of these less than 1 per cent have specifically paid £2.50 following union pressure.

"With support from all areas in the country, who would without doubt have been ultimately involved had Midlands hauliers given way, the opposition to the claim has been successful in every sense of the word.

"Agreements with improved basic wages have certainly been made on an individual basis with hauliers, and these agreements vary as they always will according to the type of operation performed and any productivity element involved. These agreements could well have been made without hauliers and drivers losing thousands of pounds — a loss that will never be recovered. The original outrageous claim for £2.50 for holding a licence, plus £5 increase on basic pay, had to be fought. There was never any question of witholding an increase in basic pay which was due to be made after a standstill and peace for 1 months. The principle fought in th Midlands was on the demand for a specie payment for holding a licence.

"As a result of the stand made, TGWI headquarters, through their spokesman, M Ken Jackson, have stated that 'It is no TGWU policy to press for additions payment above the agreed basic rate for th possession of an hgv licence.' Mr Jacks° saw that there would be genuine objection to an hgv payment seperate from the basi rate. Mr Jackson also stated: `TGWI policy could not support blacking action This is a remarkable statement when on realizes that blacking of vehicles has beei common and widely practised for year with, in my view, the full knowledge a union headquarters.

"One can only hope that the statemen augurs well for the future and tha negotiations henceforth may be conductel in a proper civilized manner with dignity b; both the trade union and the employers."