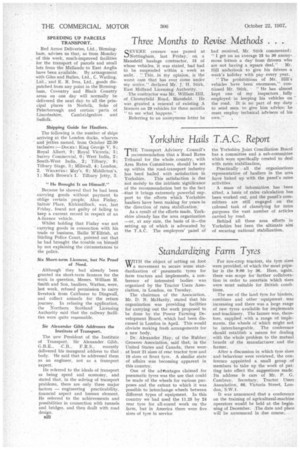 Page 56, 22nd October 1937 — Three Months to Revise Methods . .4 , S EVERE censure was
Close
Noticed an error?
If you've noticed an error in this article please click here to report it so we can fix it.
Keywords : Mansfield, Cornelius Stirk, Chesterfield, Evere, Business / Finance

passed at Nottingham, last Friday,' on a Mansfield haulage contractor, 15 of whose vehicles, it was stated, had had to be suspended within a week as

unfit. This, in My opinion, is the worst case that has ever come under my notice," declared Mr. J. H. Stirk, East Midland Licensing Authority.

The contractor was Mr. William Hill, of Chesterfield Road, Mansfield. He was granted a renewal of existing A licences on 29 vehicles for three months " to see what happens."

Referring to an anonymous letter he had received, Mr. Stirk commented: " I get on an average 25 to 30 anonymous letters a day from drivers who are not having a square deal." Mr. Hill undertook to give his drivers a week's holiday with pay every; year.

" The prohibitions of Mr. Hill's vehicles have been enormous," con

tinued Mr. Stirk. " He has almost _kept one of my inspectors , fully employed in keeping his vehicles on the road. It is no past of my duty to send men to give him -advice; he must employ technical advisers of his own,"