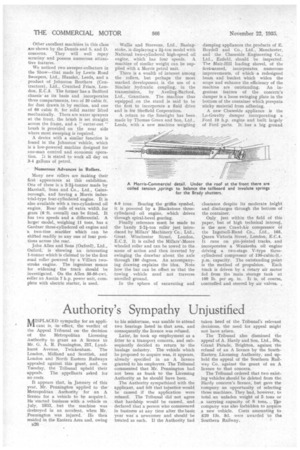 Page 36, 22nd November 1935 — Authority's Sympathy Unjustified
Close
Noticed an error?
If you've noticed an error in this article please click here to report it so we can fix it.
Keywords : Law / Crime, Business / Finance

TtIIISPLACED sympathy for an appli • IVI cant is, in effect, the verdict of the Appeal Tribunal onthe decision of the Metropolitan Licensing Authority to grant an A licence to Mr. G. A. R. Pennington, 217, Lyndhurst Avenue, Twickenham. The Landon, Midland and Scottish, and London and North Eastern Railways appealed against this grant, and, on Tuesday, the Tribunal upheld their appeals. The appellants asked for no costs.

IL appears that, in January of this year, Mr.. Pennington applied to the Metropolitan Authority for an A licence for a vehicle to be acquire.l. He started business with a vehicle in . July, 1933, but the . machine was destroyed in an accident, when Mr. .Penningten was injured. He then resided in the Eastern Area-and, owing to his misfortune, was unable to attend two hearings listed in that area, and consequently the licence was refused.

Later, he took up employment as a fitter to a transport concern, and subsequently decided to return to the haulage industry. The vehicle which he proposed to acquire was, it appears, already specified in an A licence granted to his employers. The Tribunal commented that Mr. Pennington had not been as frank to the Licensing Authority as he should have been.

The Authority sympathized with the applicant, and felt that injustice would be caused if the application were refused. The Tribunal did not agree that hardship would be caused, and declared that a person who commenced in business at any time after the basic year was a newcomer and should be treated as such. If the Authority had taken heed of the Tribunal's relevant decisions, the need for appeal might not have arisen.

The Tribunal ordered that two existing vehicles should be deleted from the Hardy concern's licence, but gave the Company an opportunity of selecting those machines. They had, however, to total an unladen weight of 5 tons or a carrying capacity of 8 tons, , TAie company was also forbidden to acquire a new vehicle. Costs amounting to £20 13s. 8d. were awarded to the Southern Railway.