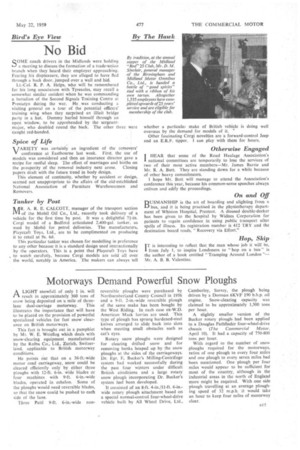 PI.A LIGHT snowfall of only 1 in. will result in approximately 360 tons of snow being deposited on a mile of threelane dual-carriage motorway. This illustrates the importance that will have to be placed on the provision of powerful specialized vehicles for fast snow clearance on British motorways.

This fact is brought out in a pamphlet by Mr. W. E. Weisflog which deals with snow-clearing equipment manufactured by the Rolba Co., Ltd., Zurich, Switzerland, applicable to British motorway conditions.

He points Out that on a 36-ft.-wide motor road carriageway, snow could be cleared efficiently only by either three ploughs with 12-ft. 6-in, wide blades or four machines with 9-ft. 6-in.-wide blades, operated in echelon. Some of the ploughs would need reversible blades, so that the snow could be pushed to each side of the lane.

reversible ploughs were purchased by Northumberland County Council in 1956 and a 9-ft. 2-in.-wide reversible plough of the same make has been bought by the West Riding. In each case ex-W.D. American 'Mack lorries are used. This type of plough has sprung hardened-steel knives arranged to slide back into slots when meeting small obstacles such as cat's eyes.

Rotary snow ploughs were designed for clearing drifted snow and for removing banks heaped up by the snow ploughs at the sides of the carriageways. Dr. Egr. E. Bucker's Milling-Centrifuge system had worked successfully during the past four winters under difficult British conditions and a large rotary snow plough incorporating Dr. Bucker's system had been developed.

It consisted of an 8-ft. 4-in./11-ft. 6-in.wide rotary plough attachment based on a special normal-control four-wheel-drive vehicle built by All Wheel Drive, Ltd., Camberley, Surrey, the plough being driven by a Dorman 6KVF 190 b.h.p. oil engine. Snow-clearing capacity was claimed to be approximately 1,500 tons per hour.

A slightly smaller version of the Bucker rotary ploughk had been applied to a Douglas Pathfinder four-wheel-drive chassis (The Commercial Motor, April 10). It had a capacity of 750-800 tons per hour.

With regard to the number of snow ploughs required for the motorways, ratios of one plough to every four miles and one plough to every seven miles had been mentioned. One plough per four miles would appear to be sufficient for most of the country, although in the industrial areas in the north of England more might be required. With one side plough travelling at an average ploughing speed of 32 m.p.h. it would take an hour to keep four miles of motorway clear.