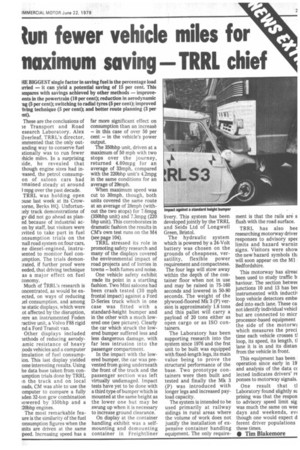 HE BIGGEST single factor in saving fuel is the percentage load trried — it can yield a potential saving of 15 per cent. This lompares with savings achieved by other methods — improveents in the powertrain (10 per cent); reduction in aerodynamic .ag (5 per cent); switching to radial tyres (5 per cent); improved Wing technique (5 per cent); and better route planning (3 per ,nt).

These are the conclusions of le Transport and Road esearch Laboratory. Alex ilverleaf, TRRL's director, nnmented that the only outanding way to conserve fuel itionally was to run fewer thicle miles. In a surprising ;ide, he revealed that though engine sizes had in'eased, the petrol consumpon of saloon cars had .tnained steady at around 1mpg over the past decade. TRRL was holding open use last week at its Crowtorne, Berks HQ. Unfortun:ely track demonstrations of gv did not go ahead as planed because of industrial acon by staff, but visitors were tvited to take part in fuel onsumption trials on the 'nail road system on four cars, ne diesel-engined, instrutented to monitor fuel conamption. The trials demon:rated, if further proof were eeded, that driving technique as a major effect on fuel conomy. Much of tRRL's research is oncentrated, as would be exected, on ways of reducing lel consumption, and among ae static displays, which were ot affected by the disruption, rere an instrumented Foden ractive unit, a Volvo F88 rigid nd a Ford Transit van.

Other displays included lethods of reducing aerodyamic resistance of heavy pods vehicles and a computer imulation of fuel consumpion. This last display yielded ome interesting results. Using he data base taken from conumption trials done by TRRL in the track and on local oads, CM was able to use the .omputer to compare a fully Iden 32-ton gcw combination oowered by 350bhp and a ;20bhp engines.

The most remarkable feaure is the similarity of the fuel :onsumption figures when the mits are driven at the same peed. Increasing speed has a far more significant effect on consumption than an increase – in this case of over 50 per cent – in the vehicle's power output.

When maximum speed was cut to 30mph, though, both units covered the same route at an average of 28mph (without the two stops) for 7.6mpg (350bhp unit) and 7.3mpg (220 bhp unit). This corroborates in dramatic fashion the results in CM'S own test runs on the M4 (see page 104).

TRRL stressed its role in promoting safety research and many of the displays covered the environmental impact of road projects and of lorries in towns – both fumes and noise.

One vehicle safety exhibit rrade its point in a startling fashion. Two Mini saloons had been crash tested (30 mph frontal impact) against a Ford D-Series truck which in one case was fitted with a standard-height bumper and in the other with a much lowered one (see picture). Clearly the car which struck the lowered bumper suffered less and less dangerous damage, with far less intrusion into the passenger compartment.

In the impact with the lowered bumper, the car was prevented from going underneath the front of the truck and the passenger section was left virtually undamaged. Impact tests have yet to be done with a third type of bumper which is mounted at the same height as the lower one but may be swung up when it is necessary to increase ground clearance.

On display at the container handling exhibit was a selfmounting and demounting container in Freightliner livery. This system has been developed jointly by the TRRL and Seids Ltd of Longwell Green, Bristol.

The hydraulic system which is powered by a 24-Volt battery was chosen on the grounds of cheapness, versatility, flexible power requirement and compactness. The four legs will stow away within the depth of the container floor when not in use and may be raised in 75-160 seconds and lowered in 50-80 seconds. The weight of the plywood-floored Mk 3 (P) version is approximately 1.8 tons and this pallet will carry a payload of 20 tons either as open cargo or as ISO containers.

The Laboratory has been supporting research into the system since 1976 and the frst unit to be built was equipped with fixed-length legs, its main value being to prove the structural performance of the base. Two prototype containers were then built and tested and finally the Mk 3 (P) was introduced with longer legs and increased payload capacity.

The system is intended to be used primarily at railway sidings in rural areas where the volume of work does not justify the installation of expensive container handling equipment. The only require ment is that the rails are s flush with the road surface.

This motorway has alreac been used to study traffic h haviour. The section betwe( junctions 10 and 13 has be instrumented with inductil loop vehicle detectors embe ded into each lane. These ca not identify individual vehicl but are connected to micr processor-based equipment the side of the motorw( which measures the preci time each vehicle crosses ti loop, its speed, its length, tl lane it is in and its distan from the vehicle in front.

This equipment has been operation since early in 19 and analysis of the data cc lected indicates drivers' re ponses to motorway signals.

One result that ti Laboratory found slightly st prising was that the respon to advisory speed limit sig was much the same on wee days and weekends, evf though one would expect d ferent driver populations these times.