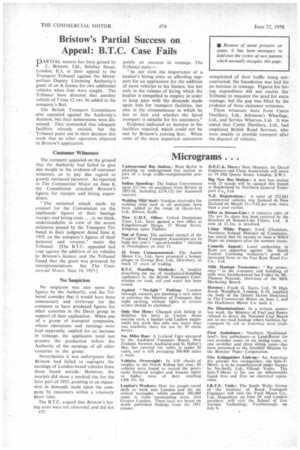 Page 66, 22nd June 1956 — Bristow's Partial Success on Appeal: B.T.C. Case Fails
Close
Noticed an error?
If you've noticed an error in this article please click here to report it so we can fix it.

DARTIAL success has been gained by

1 C. Bristow, Ltd., Solebay Street, London, E.3, in their appeal to the Transport Tribunal against the Metropolitan Deputy Licensing Authority's grant of an A licence for two additional vehicles when four were sought. The Tribunal have directed that another vehicle of 7 tons 12 cwt. be added to the company's fleet.

The British Transport Commission also appealed against the Authority's decision, but their submissions were dismissed. They contended that adequate facilities already existed, but the Tribunal point out in their decision this week that no other operators objected to Bristow's application. •

Customer Witnesses The company appealed on the ground that the Authority had failed to give due weight to the evidence of customer witnesses, or to pay due regard to greatly increased turnover. As reported in The Commercial Motor on June 8, the Commission attacked Bristow's figures for receipts and hiring expenditure.

"The sustained attack made by counsel for the Commission on the applicants' figures of their haulage receipts and hiring costs ... is, we think, understandable in view of the severe strictures passed by the Transport Tribunal in their judgment dated June 4, 1955, on the company's figures of their turnover and revenue," states the Tribunal. [The B.T.C. appealed last year against the addition of six vehicles to Bristow's licence, and the Tribunal found that the grant was procured by misrepresentations. See The Commercial Motor. June 10. 1955.] No Suspicion

No suspicion was cast upon the figures by the Authority, and the Tribunal consider that it would have been unnecessary and irrelevant for the company to have produced figures for other concerns in the Davis group in support of their application. When one of a group of transport companies, whose operations and earnings were kept separately, applied for an increase in tonnage, the applicants need not procure the production before the Authority of the earnings of all other concerns in the group.

Nevertheless it was unfortunate that Bristow had failed to segregate the earnings of London-based vehicles from those based outside. However, the receipts did show a marked rise for the later part of 1955, pointing to an expansion in demands made upon the company by customers within a relatively short time.

The B.T.C. argued that Bristow's hiring costs were not abnormal and did riot justify an increase in tonnage. The Tribunal state:— " In our view the importance of a haulier's hiring costs as affording support for an application for the addition of more vehicles to his licence, lies not only in the volume of hiring which the haulier is compelled to employ in order to keep pace with the demands made upon him for transport facilities, but also in the circumstances in which he has to hire and whether the ' hired transport is suitable for his customers."

Evidence indicated an increase in the facilities required, which could not be met by Bristow's existing fleet. When some of the more important customers complained of their traffic being subcontracted, the foundation was laid for an increase in tonnage. Figures for hiring expenditure did not enable the Tribunal to measure the need for extra tonnage, but the gap was filled by the evidence of three customer witnesses.