Bus Board Planned for Brighton Area : Southdown Not Asked 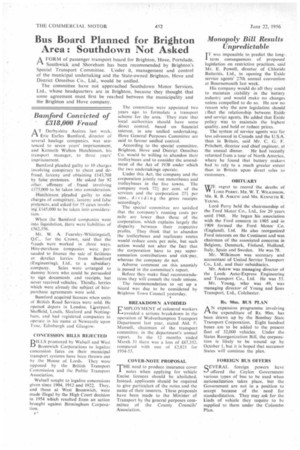 A FORM of passenger transport board for Brighton, Hove, Portslade, r-k Southwick and Shoreham has been recommended by Brighton's Special Transport Committee. Under it, management and control of the municipal undertaking and the Stale-owned Brighton, Hove and District Omnibus Co.. Ltd., would be unified.

The committee have not approached Southdown Motor Services. Ltd., whose headquarters are in Brighton, because they thought that some agreement must first be reached between the municipality and the Brighton and Hove company.

The committee were appointed two years ago to formulate a transport scheme for the area. They state that local authorities should have some direct control, based on financial interest, in any unified undertaking. Hove General Purposes Committee are said to favour unified control.

According to the special committee, Brighton, Hove and District Omnibus Co. would he willing to abandon their trolleybuses and to consider the amendment Of the Act of 1938 under which the two undertakings operate.

The special committee are satisfied that the company's running costs per mile are lower than those of the corporation. which explains largely the disparity between their respective profits. They think that to abandon the trolleybuses and reallocate routes would reduce costs per mile, but such action would not alter the fact that the corporation have to pay superannuation contributions and sick-pay, -whereas the company do not.

Adverse comment on this anomaly is passed in the committee's report.

Before they make final recommendations they will consult the trade unions.

• The recommendation to set up a board was due to he considered by Brighton Town Council yesterday.

EMPLOYMENT of coloured workers I-Javoided a serious breakdown in the operation of Wolverhampton Transport Department last year. stated Ald. F. Mansell. chairman of the transport committee, in the department's annual report. In the 12 months ended March 31 there was a loss of £67,352, compared with one of £2,821 for 1954-55.

COVER-NOTE PROPOSAL HE need to produce insurance cover I notes when applying for vehicle Excise licences should be abolished. Instead, applicants should be required to give particulars of the notes and the name of their insurers. These proposals have been made to the Minister of Transport by the general purposes committee of the County Councils' Association.