The case for outer-axle braking 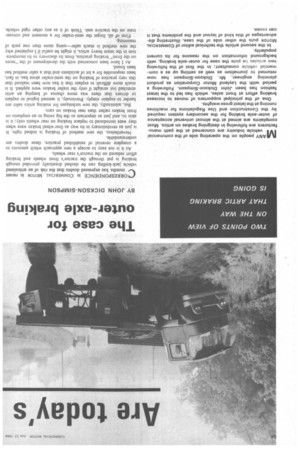 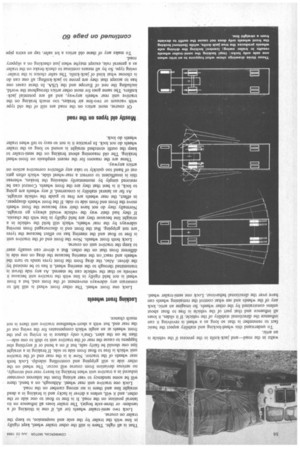 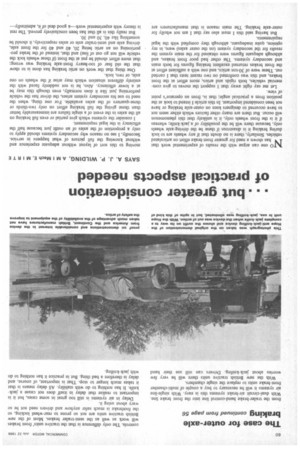 BY JOHN DICKSON SIMPSON MANY people on the operating side of the commercial vehicle industry are concerned at the path manufacturers are following in designing brakes on artics. Most complaints are aimed at the almost universal acceptance of outer-axle braking for the secondary system required by the Construction and Use Regulations for machines running at the latest gross weights.

One of the principal supporters of moves to increase braking effort at front axles, which has led to the latest fashion has been John Dickson-Simpson. Following a period with the Leyland Motor Corporation as product planning engineer, Mr. Dickson-Simpson has now returned to journalism as well as setting up as a commercial vehicle consultant; in the first of the following two articles he puts the case for outer-axle braking, with background information on the reasons for its current popularity.

In the second article the technical editor of COMMERCIAL MOTOR puts the other side of the case, illustrating disadvantages of this kind of layout and the problems that it can cause. CORRESPONDENCE ill COMMERCIAL MOTOR in recent months has expressed doubts that the risk of an articulated vehicle jack-knifing can be slashed drastically provided enough braking is put through the tractor's front wheels and braking effort reduced on the tractor's rear wheels.

As it is not easy to accept a new approach which amounts to a complete reversal of established practice, these doubts are understandable.

Nevertheless, the new method of braking is indeed right. It is just as revolutionary in its way as four-wheel brakes were when they were introduced to replace braking on rear wheels only; it is akin to, and just as important as the big swing to an emphasis on front brakes rather than rear brakes on cars.

But, admittedly, the new techniques for making artics safer are harder to explain simply. Previously, it seemed logical to explain to drivers that there was more chance of keeping an artic stretched out straight if only the trailer brakes were applied. It is much more difficult to explain that it has now been realized that this very practice of braking on the semi-trailer alone has, in fact, been responsible for a lot of accidents and that a safer method has been found.

As I have been concerned with the development of the "more on the front" braking practice, from its discovery to its incorporation in the latest heavy artics, it might be useful if I explained why the new method is much safer—using more than one path of reasoning.

First of all, forget the semi-trailer for a moment and concentrate on the tractive unit. Think of it as any other rigid vehicle. waltz in the road—and jack-knife in the process lithe vehicle is an artic.

To understand this wheel-locking and stability aspect the basic fact to remember is that so long as a wheel is revolving it can influence the directional stability of the vehicle. If it slides, it loses all influence and that part of the vehicle is free to float about unless constrained by the other wheels. So imagine an artic, lock any of the wheels and see what control the remaining wheels can have over the directional behaviour. Lock one semi-trailer wheel. That is all right. There is still the other trailer wheel, kept rigidly in line with the trailer by the axle and suspension, to keep the trailer on course.

Lock two semi-trailer wheels (or all, if one is thinking of a tandemor three-axle bogie). The trailer loses all influence on its lateral position on the road. It is free to float to one side or the other, and it unless a driver is lucky and is braking in a dead straight line and there is no strong camber on the road.

Lock one tractive unit rear wheel. Although, on a bend, there will be some tendency to veer arising from the inherent oversteer induced in a tractive unit when braking its heavy rear-end strongly, no serious deviation from course will occur. The wheel on the other side is still gripping and controlling sideslip. Lock both rear wheels of the tractor. Now it is the rear end of the tractive unit which is free to float from side to side. If braking in a straight line one should be fairly safe, but if on a bend or if anything else happens to cause the rear of the tractive unit to shift to one side— then be on the alert. One's only chance is in trying to put the front wheels at an angle which compensates for the swing out of the rear end, but with a short-wheelbase tractive unit there is not much chance.

Lock one front wheel. The other front wheel is still left to constrain any sideways movement of the front end, but a front wheel is not held rigidly in line with the tractive unit because it swivels so that the vehicle can be steered. As any side thrust is transmitted through to the steering wheel, it has to be resisted by the driver. Also, the drag from the front tyres tends to turn the wheels and react' on the steering because the drag on one side is different from that on the other. But a driver can usually steer to keep the tractive unit on course.

As far as lateral stability is concerned, if any wheels are going to lock, it is best that they are the front wheels. Control can be restored simply by momentarily releasing the brakes; whereas this is insufficient to correct a rear-wheel slide, which often gets Out of hand too quickly to take any effective corrective action on artics anyway.

These are the reasons for the recent emphasis on front-wheel braking. The old reasoning about braking on the semi-trailer to keep the outfit stretched straight is sound so long as the trailer wheels do not lock. In practice it is not so easy to tell when trailer wheels do lock.

Mostly old types on the road

01 course, most artics on the road are still of the old type with vacuum or two-line air brakes, too much braking on the tractive unit rear wheels anyway, and all are potential jackknifers. The same goes for most other artics throughout the world, including the rest of Europe and the USA. In these cases one has to accept that they are prone to jack-knifing; all one can do is choose what kind of jack-knife. The safer choice is the trailerswing type. So by all means continue to check-brake on the trailer as a general rule, except maybe when just checking on a slippery road.

To make any of these old artics a lot safer, tap an extra pipe from the trailer-brake hand-control line into the front brake line. With dual-circuit air-brake systems this is easy. With single-line air systems it will be necessary to buy a couple of multi-chamber front-brake units to replace the single chambers.