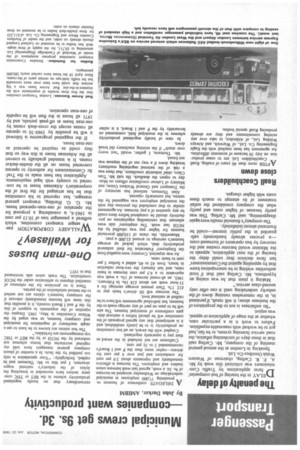 WALLASEY CORPORATION passenger transport committee, which suffered a passenger loss of 10.15 per cent in 1965-6, is considering a proposal for the operation of one-man-operated buses. Mr. G. G. Harding, transport general manager, has reported to his committee that he has arranged for the first of the corporation's Atlantean buses to be converted to comply with legal requirements.

Application has been made to the Traffic Commissioners for authority to operate converted buses on all the double-decker routes. It is intended gradually to convert all the Atlantean buses in this way so that they could as required be operated as one-man buses.

If the suggested programme is followed it will be possible by 1969-70 to operate all routes except the cross-dock routes by one-man buses at off-peak periods, and by 1971 all buses in the fleet will be capable of one-man operation.