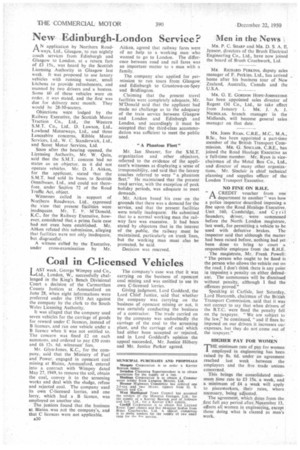 Page 32, 22nd December 1950 — Men in the News
Close
Noticed an error?
If you've noticed an error in this article please click here to report it so we can fix it.
Keywords : British Transport Commission, Law / Crime

MR. JOHN RYAN, C.B.E., M.C., M.A., B.Sc., has been appointed a part-time member of the British Transport Commission. MR. G. SINCLAIR. C.B.E., has joined the Road Haulage Executive as a full-time member. Mr. Ryan is vicechairman of the Metal Box Co., Ltd., and director of many other organizations. Mr. Sinclair is chief technical planning and supplies officer of the London Transport Executive.

"A CREDIT voucher from one department to another" was how a police inspector described imposing a fine upon the Road Haulage Executive. Unit 160, Cambridge, and Cy r i Saunders, driver, were summoned before the North London magistrate. last week, for permitting a vehicle to be used with defective brakes. The inspector said that although the matter had been raised before, nothing had yet been done to bring to court a responsible employee from the R.H.E.

The magistrate, Mr. Frank Powell: "The person who ought to be fined is the person who allows the vehicle out on the road. 1 don't think there is any point in imposing a penalty on either defendant. The summonses will be dismissed without penalty, although I find the offences proved."

Speaking at Carlisle, last Saturday. Lord Hurcomb, chairman of the British Transport Commission, said that it was not correct to say that when drivers of the B.T.C. were fined the penalty fell on the taxpayer. "We are subject to the law," he continued, "and if fines be imposed on our drivers it increases our expenses, but they do not come out of the taxpayer."

THE minimum rate of pay for women employed in engineering has been raised by 8s. 6d. under an agreement reached last week between the employers and the five trade unions concerned.

This brings the consolidated minimum time rate to £3 15s. a week, and a minimum of £4 a week will apply to pieceworkers, their rates, where necessary, being adjusted.

The agreement, which dates from the first full pay period afteriggkernber 13, affects all women in engineering, except those doing what is classed as men's work.