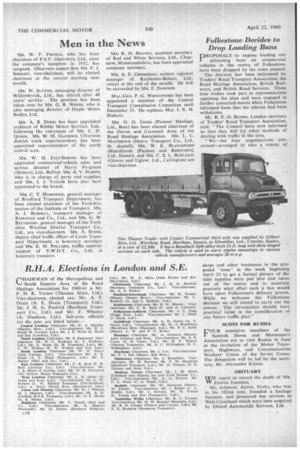 Page 46, 22nd April 1960 — Men in the News
Close
Noticed an error?
If you've noticed an error in this article please click here to report it so we can fix it.
Keywords : Business / Finance

MR. W. F. FRENCH, who has been chairman of P.S.V. Operators, Ltd., since the company's inception in 1932, has resigned. Observers expect that MR. F. J. SPEIGHT, vice-chairman, will be elected chairman at the annual meeting next month.

MR. W. H. Frrz-SmoNs has been appointed commercial-vehicle sales and service director of Harry Ferguson (Motors), Ltd., Belfast. MR. A. V. HARRIS, who is in charge of parts and supplies, and MR. J. J. TAYLOR have also been appointed to the board.

MR. A. E. GRIMSHAW, eastern regional manager of Raybestos-Belaco, Ltd., retires at the end of the month. He will be succeeded by MR. F. DAWSON.