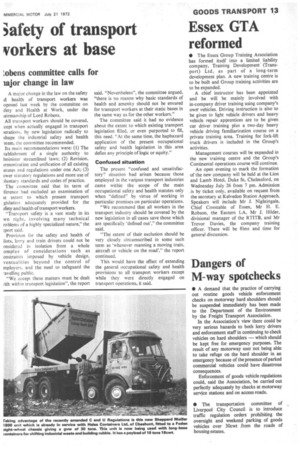 Page 15, 21th July 1972 — 3afety of transport vorkers at base
Close
Noticed an error?
If you've noticed an error in this article please click here to report it so we can fix it.

A major change in the law on the safety id health of transport workers was oposed last week by the committee on. day and Health at Work, under the tairmanship of Lord Robens.

All transport workers should be covered, cept when actually engaged in transport ierations. by new legislation radically to shape the industrial safety and health 'stem. the committee recommended.

Its main recommendations were: (1) The tablishment of a single authority to Iminister streamlined laws; (2) Revision, irmonization and unification of all existing atutes and regulations under one Act; (3) ewer statutory regulations and more use of Muntary standards and codes of practice. The committee said that its term of :ference had excluded an examination of le extent to which present transport :gislation adequately provided for the afety and health of transport workers.

"Transport safety is a vast study in its wn right, involving many technical roblems of a highly specialized nature," the !port said.

Provision for the safety and health of ilots, lorry arid train drivers could not be onsidered in isolation from a whole omplex of considerations such as onstraints imposed by vehicle design, ventualities beyond the control of mployers, and the need to safeguard the :avelling public.

"We accept these matters must be dealt vith within transport legislation", the report said. "Nevertheless", the committee argued, "there is no reason why basic standards of health and amenity should not be ensured for transport workers at their static bases in the same way as for the other workers."

The committee said it had no evidence about the extent to which existing transport legislation filled, or even purported to fill, this need. -At the same time, the haphazard application of the present occupational safety and health legislation in this area defies any principle of logic or equity."

The present -confused and unsatisfactory'? situation had arisen because those employed in the various transport industries came within the scope of the main occupational safety and health statutes only when "definedby virtue of working in .particular premises on particular operations.

"We recommend that all workers in the transport industry should be covered by the new legislation in all cases save those which are specifically 'defined out'," the committee said.

"The extent of their exclusion should be very closely circumscribed in some such term as 'whenever manning a moving train, aircraft or vehicle on the road'," the report continued.

This would have the effect of extending the general occupational safety and health provisions to all transport workers except while they were directly engaged on transport operations, it said.