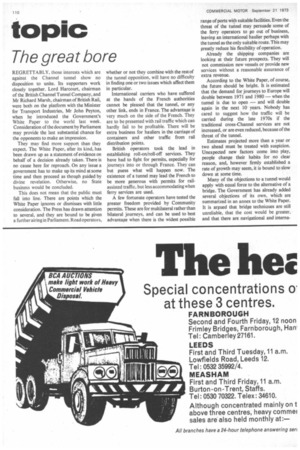 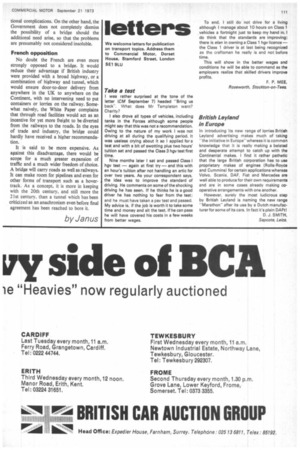 REGRETTABLY, those interests which are against the Channel tunnel show no disposition to unite. Its supporters work closely together. Lord Harcourt, chairman of the British Channel Tunnel Company, and Mr Richard Marsh, chairman of British Rail, were both on the platform with the Minister for Transport Industries, Mr John Peyton, when he introduced the Government's White Paper to the world last week. Consideration of the document by Parliament may provide the last substantial chance for the opponents to make an impression.

They may find more support than they expect. The White Paper, after its kind, has been drawn up as a statement of evidence on behalf of a decision already taken. There is no cause here for reproach. On any issue a government has to make up its mind at some time and then proceed as though guided by divine revelation. Otherwise, no State business would be concluded.

This does not mean that the public must fall into line. There are points which the White Paper ignores or dismisses with little consideration. The Press has drawn attention to several, and they are bound to be given a further airing in Parliament. Road operators, whether or not they combine with the rest of the tunnel opposition, will have no difficulty in finding one or two issues which affect them in particular.

International carriers who have suffered at the hands of the French authorities cannot be pleased that the tunnel, or any other link, ends in France. The advantage is very much on the side of the French. They are to be presented with rail traffic which can hardly fail to be profitable. There will be extra business for hauliers in the carriage of containers and other traffic from rail distribution points.

British operators took the lead in establishing roll-on/roll-off services. They have had to fight for permits, especially for journeys into or through France. They can but guess what will happen now. The existence of a tunnel may lead the French to be more generous with permits for railassisted traffic, but less accommodating when ferry services are used.

A few fortunate operators have tested the greater freedom provided by Community permits. These are for multilateral rather than bilateral journeys, and can be used to best advantage when there is the widest possible range of ports with suitable facilities. Even the threat of the tunnel may persuade some of the ferry operators to go out of business, leaving an international haulier perhaps with the tunnel as the only suitable route. This may greatly reduce his flexibility of operation.

Already the shipping companies are looking at their future prospects. They will not commission new vessels or provide new services without a reasonable assurance of extra revenue.

According to the White Paper, of course, the future should be bright. It is estimated that the demand for journeys to Europe will double between 1971 and 1980— when the tunnel is due to open — and will double again in the next 10 years. Nobody has cared to suggest how the traffic will be carried during the late 1970s if the traditional cross-Channel services are not increased, or are even reduced, because of the threat of the tunnel.

Estimates projected more than a year or two ahead must be treated with suspicion. Unexpected new factors come into play, people change their habits for no clear reason, and, however firmly established a rate of growth may seem, it is bound to slow down at some time.

Many of the objections to a tunnel would apply with equal force to the alternative of a bridge. The Government has already added several objections of its own. which are summarized in an annex to the White Paper. It is argued that bridge techniques are still unreliable, that the cost would be greater, and that there are navigational and interna tional complications. On the other hand, the Government does not completely dismiss the possibility of a bridge should the additional need arise, so that the problems are presumably not considered insoluble.

French opposition No doubt the French are even more strongly opposed to a bridge. It would reduce their advantage if British industry were provided with a broad highway, or a combination of highway and tunnel, which would ensure door-to-door delivery from anywhere in the UK to anywhere on the Continent, with no intervening need to put containers or lorries on the railway. Somewhat naively, the White Paper complains that through road facilities would act as an incentive for yet more freight to be diverted from the railways to the roads. In the eyes of trade and industry, the bridge could hardly have received a higher recommendation.

It is said to be more expensive. As against this disadvantage, there would be scope for a much greater expansion of traffic and a much wider freedom of choice. A bridge will carry roads as well as railways, It can make room for pipelines and even for other forms of transport such as a hovertrack. As a concept. it is more in keeping with the 20th century, and still more the 21st century. than a tunnel which has been criticized as an anachronism even before final agreement has been reached to bore it.