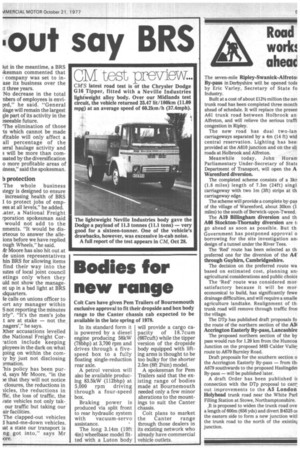 Page 7, 21st October 1977 — Road work.
Close
Noticed an error?
If you've noticed an error in this article please click here to report it so we can fix it.
Keywords : Roads In England, Trunk Road, Hospitality / Recreation

The seven-mile Ripley-Swanick-Alfretoi By-pass in Derbyshire will be opened toda by Eric Varley, Secretary of State fo Industry.

Built at a cost of about E121/2 million the nel trunk road has been completed three month ahead of schedule. It will replace the preset] A61 trunk road between Holbrook an Alfreton, and will relieve the serious traffi congestion in Ripley.

The new road has dual two-lan carriageways separated by a 4m (14 ft) wid central reservation. Lighting has bee: provided at the A610 junction and on the sli. roads at Holbrook and Alfreton.

The scheme will provide a complete by-pas of the village of Warenford, about 30km (I, miles) to the south of Berwick-upon-Tweed, The A111 =Ingham diversion and th. A66 Stockton-Thornaby diversion are ti go ahead as soon as possible. But th. Government has postponed approval o borrowing for the site investigation an, design of a turinel under the River Tees.

The 'Red' route has been selected as th. preferred one for the diversion of the A4' through Guyhirn, Cambridgeshire.

The decision on the preferred route wa based on estimated cost, planning am agricultural considerations and public choict The 'Red' route was considered mor, satisfactory because it will be mon economical to build, has significantly fewe drainage difficulties, and will require a smalle agriculture landtake. Realignment of th. trunk road will remove through traffic fron the village.

Draft proposals for the southern section o the Accrington Easterly By-pass — from thi A679 southwards to the proposed Haslingdei By-pass — will be published later.

A draft Order has been published ii connection with the DTp proposal to cam out improvements to the A5 London Holyhead trunk road near the White Par! Filling Station at Stowe, Northamptonshire. is proposed to widen the trunk road ove a length of 600m (656 yds) and divert B4525 01 the eastern side to form a new junction witl the trunk road to the north of the existirq junction.