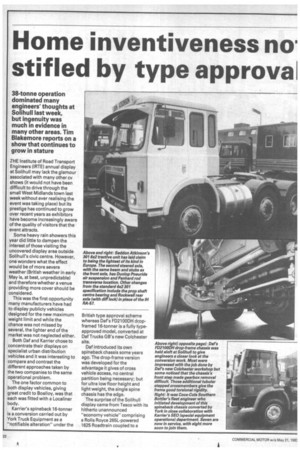 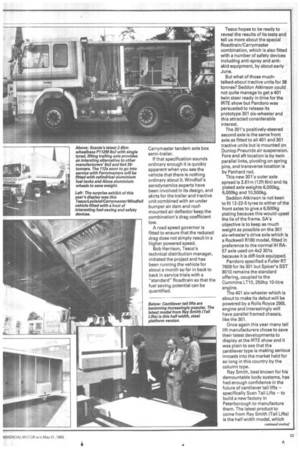 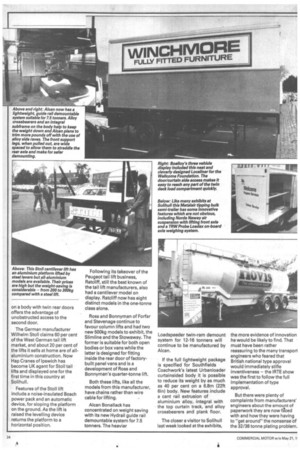 38-tonne operation dominated many engineers' thoughts at Solihull last week, but ingenuity was much in evidence in many other areas. Tim Blakemore reports on a show that continues to grow in stature THE Institute of Road Transport Engineers (IRTE) annual display at Solihull may lack the glamour associated with many other cv shows (it would not have been difficult to drive through the small West Midlands town last week without ever realising the event was taking place) but its prestige has continued to grow over recent years as exhibitors have become increasingly aware of the quality of visitors that the event attracts.

Some heavy rain showers this year did little to dampen the interest of those visiting the uncovered display area outside Solihull's civic centre. However, one wonders what the effect would be of more severe weather (British weather in early May is, at best, unpredictable) and therefore whether a venue providing more cover should be considered.

This was the first opportunity many manufacturers have had to display publicly vehicles designed for the new maximum weight limit and while the chance was not missed by several, the lighter end of the market was not neglected either.

Both Daf and Karrier chose to concentrate their displays on specialist urban distribution vehicles and it was interesting to compare and contrast the different approaches taken by the two companies to the same operational problem.

The one factor common to both display vehicles, giving great credit to Boalloy, was that each was fitted with a Loca liner body.

Daf introduced its own spineback chassis some years ago. The drop-frame version was developed for the advantage it gives of cross vehicle access, no central partition being necessary; but for ultra low floor height and light weight, the single spine chassis has the edge.

The surprise of the Solihull display came from Tesco with its hitherto unannounced "economy vehicle" comprising a Rolls Royce 265L-powered 1625 Roadtrain coupled to a Carrymaster tandem axle box semi-trailer.

If that specification sounds ordinary enough it is quickly apparent when you see the vehicle that there is nothing ordinary about it. Windfoil's aerodynamics experts have been involved in its design, and skirts for the trailer and tractive unit combined with an under bumper air dam and roofmounted air deflector keep the combination's drag coefficient low.

A road speed governor is fitted to ensure that the reduced drag does not simply result in a higher powered speed.

Bob Harrison, Tesco's technical distribution manager, initiated the project and has been running the vehicle for about a month so far in back to back in service trials with a "standard" Roadtrain so that the fuel saving potential can be quantified. Tesco hopes to be ready to reveal the results of its tests and tell us more about the special Roadtrain/Carrymaster combination, which is also fitted with a number of safety devices including anti-spray and antiskid equipment, by about early June.

But what of those muchtalked-about tractive units for 38 tonnes? Seddon Atkinson could not quite manage to get a401 twin steer ready in time for the IRTE show but Pandoro was persuaded to release its prototype 301 six-wheeler and this attracted considerable interest.

The 301's positively-steered second axle is the same front axle as fitted to all 401 and 301 tractive units but is mounted on Dunlop Pneuride air suspension. Fore and aft location is by twin parallel links, pivoting on spring pins, and transverse location is by Panhard rod.

Seddon Atkinson is not keen to fit 12-22-5 tyres to either of the front axles to give a 6,500kg plating because this would upset the lie of the frame. SA's objective is to keep as much weight as possible on the 301 six-wheeler's drive axle which is a Rockwell R180 model, fitted in preference to the normal IH RA57 axle used on 4x2 301s because it is diff-lock equipped.

The 401 six-wheeler which is about to make its debut will be powered by a Rolls Royce 290L engine and interestingly will have parallel framed chassis, like the 301.

Once again this year many tail lift manufacturers chose to save their latest developments to display at the IRTE show and it was plain to see that the cantilever type is making serious inroads into the market held for so long in this country by the column type.

Ray Smith, best known for his demountable body systems, has had enough confidence in the future of cantilever tail lifts — specifically Scan Tail Lifts — to build a new factory in Peterborough to manufacture them. The latest product to come from Ray Smith (Tail Lifts) is the half width model, which on a body with twin rear doors offers the advantage of unobstructed access to the second door.

The German manufacturer Wilhelm Stoll claims 60 per cent of the West German tail lift market, and about 20 per cent of the lifts it sells at home are of allaluminium construction. Now Hap Cranes of Ipswich has become UK agent for Stoll tail lifts and displayed one for the first time in this country at Solihull.

Features of the Stoll lift include a noise-insulated Bosch power pack and an automatic device, for sloping the platform on the ground. As the lift is raised the levelling device returns the platform to a horizontal position. Following its takeover of the Peugeot tail lift business, Ratcliff, still the best known of the tail lift manufacturers, also had a cantilever model on display. Ratcliff now has eight distinct models in the one-tonne class alone.

Ross and Bonnyman of Forfar and Stevenage continue to favour column lifts and had two new 500kg models to exhibit, the Slimline and the Stowaway. The former is suitable for both open bodies or box vans while the latter is designed for fitting inside the rear door of factorybuilt panel vans and is a development of Ross and Bonnyman's quarter-tonne lift.

Both these lifts, like all the models from this manufacturer, have chains rather than wire cable for lifting.

Alcan Bonallack has concentrated on weight saving with its new Hydrail guide rail demountable system for 7.5 tonners. The heavier Loadspeeder twin-ram demount system for 12-16 tanners will continue to be manufactured by Alcan.

If the full lightweight package is specified for Southfields Coachwork's latest Urbanloader curtainsided body it is possible to reduce its weight by as much as 40 per cent on a 6.8m (22ft Sin) body. New features include a cant rail extrusion of aluminium alloy, integral with the top curtain track, and alloy crossbearers and plank floor.

The closer a visitor to Solihull last week looked at the exhibits, the more evidence of innovation he would be likely to find. That must have been rather reassuring to the many transporl engineers who feared that British national type approval would immediately stifle inventiveness — the IRTE show was the first to follow the full implementation of type approval.

But there were plenty of complaints from manufacturers' engineers about the amount of paperwork they are now Iced with and how they were having to "get around" the nonsense of the 32/38 tonne plating problem.