LORRY DRIVER OF THE YEAR—TORQUAY ROUND 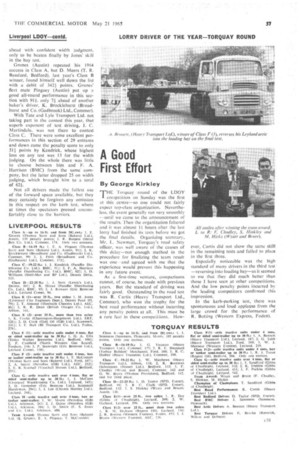 Page 59, 21st May 1965 — LORRY DRIVER OF THE YEAR—TORQUAY ROUND
Close
Noticed an error?
If you've noticed an error in this article please click here to report it so we can fix it.
Keywords : Leyland Motors, Semi-trailer Truck, Associated Equipment Company, Torquay

By George Kirkley 'THE Torquay round of the LDOY I competition on ,Sunday was the first at this centre—so one could not fairly expect top-class organization. Nevertheless, the event generally ran very smoothly —until we came to the announcement of the results. Then the organization faltered and it was almost 1+ hours after the last lorry had finished its tests before we got the anal details. Organizing secretary, Mr. L. Newman, Torquay's road safety officer, was well aware of the causes of this delay—not enough method. in the procedure for finalizing the team result was one—and agreed with me that the experience would prevent this happening in any future event.

As a first-time venture, comparisons cannot, of course, be made with previous years. But the standard of driving was fairly good. Outstanding in the road test was R. Curtis (I4eavy Transport Ltd., Commer), who Won the trophy for the best road performance without ineurring, any penalty points at alt. This Must be a rare feat in these competitions. How

ever, Curtis did not show the same skill in the remaining tests and failed to place in the first three.

Especially noticeable was the high standard of many drivers in the third test —reversing into loading bay—as it seemed to me that they did much better than those I have seen at other competitions. And the low penalty points incurred by the leading competitors confirmed this impression.

In the kerb-parking test, there was spontaneous and loud applause from the large • crowd for the performance of R. Botting (Western Express, Foden).