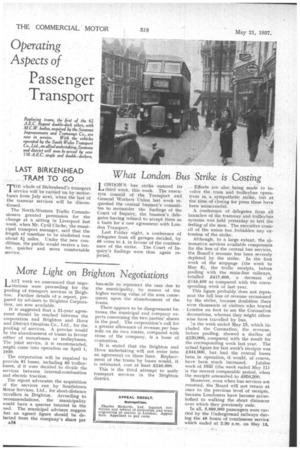 Page 68, 21st May 1937 — More Light on Brighton Negotiations
Close
Noticed an error?
If you've noticed an error in this article please click here to report it so we can fix it.

LA" week we announced that negotiations were proceeding for the pooling of transport services in Brighton. Further details of a report, prepared by advisers to Brighton Corporation, are now available.

It is suggested that a 21-year agreement should be reached between the corporation and Brighton and Hove and District Omnibus Co., Ltd., for the pooling of services. A proviso would be the abandonment of trams in favour either of motorbuses or trolleybuses. The joint service, it is recommended, might come into operation on April 1, 1939.

The corporation will be required to provide 81 buses, including 60 trolleybuses, ii it were decided to divide the services between internal-combustion and electric traction.

The report advocates the acquisition Df the services run by Southdown Motor Services, Ltd., for short-distance travellers in Brighton. According to recommendations, the municipality vould have a quarter interest in the Doc]. The municipal advisers suggest bat an agreed figure should be delutted from the company's share per .A34 bus-mile to represent the sum due to the municipality, by reason of the higher earning value of the area consequent upon the abandonment of the trams.

There appears to be disagreement between the municipal and company experts concerning the two Parties' shares in the pool. The corporation's call for a greater allowance of revenue per busmile on its own routes, compared with those of the company, is a bone of contention.

It is stated that the Brighton and Hove undertaking will not enter into an agreement on these lines. Replacement of the trams by buses would, it is estimated, cost at least £240,000.

This is the third attempt to unify transport services in the Brighton district.