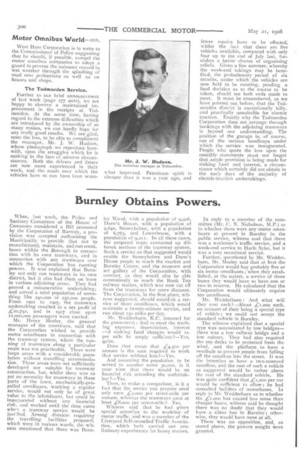 Page 8, 21st May 1908 — Burnley Obtains Powers.
Close
Noticed an error?
If you've noticed an error in this article please click here to report it so we can fix it.
Keywords : Light Rail, Tram, Nottingham, Nottingham And District Tramways Company Limited, Nottingham Corporation Tramways

When, last week, the Police and Sanitary Committee of the House of Commons considered a Bill promoted by the Corporation of Burnley, a provision was accepted authorising the Municipality to provide (but not to manufacture), maintain, and run omni_ buses within the Borough in connection with its own tramways, and in connection with any tramways over which the Corporation has running powers. It was explained that Burnley..not only ran tramways in its own district, but it also had them on lease in various adjoining areas. They had proved a remunerative undertaking, and served a total population of something like 240,000 or 250,000 people. From 1902 to 1907, the tramways undertaking resulted in a net profit of L:20,792, and in 1907 close upon 12,000,000 passengers were carried.

Mr. Henry Mosley, the general manager of the tramways, said that the Corporation wished to provide motor omnibuses in connection with the tramway system, where the running of tramways along a particular route was not practicable. There were large areas with a considerable population without travelling accommodation. These areas were not sufficiently developed nor suitable for tramway construction, but, whilst there was as yet no necessity for tramways in these parts of the town, mechanically-propelled omnibuses, working a regular service, would not only be of great value to the inhabitants, but could be inaugurated without any financial risk, and worked until the time came whei a. tramway service . would be just:tied. Among districts 'requiring the travelling, facilities proposed, which were in various wards, the witness mentioned that there was Burn ley Wood, with a population of 9,906, Danes House, with a population of 9,64o, Stoneyholme, with a population of 6,763, and Lowerhouse, with a population of 9,211. In all these cases, the proposed route connected up different sections of the tramway system. Such a service as that suggested would enable the Stoneyholme and Dane's House people to reach the market and Burnley Centre, and the museum and art gallery of the Corporation, with comfort, as they would also be able conveniently to reach the Bank Top railway station, which was now cut off from the tramways for sortie distance. The Corporation, in the first place, witness suggested, should establish a service of three omnibuses, which would maintain a twenty-minute service, and run about 2so miles per day.

Mr. Wedderburn, K.C. (counsel for the promoters): And to meet the working expenses. depreciation, interest arid sinking fund charges would is. per mile be amply suffic:ent ?—Yes, quite.

Does that mean that .Z.},soo per annum is the sum required to work that service without loss ?—Yes.

And assuming the population to be served to number some 30,000, is it your view that there would be no financial risk attending the undertaking?—Yes, Then, to make a comparison, is it a fact that the service you propose need only earn £2,000 per street-mile per annum, whereas the tramways earn at least _.'6,000 per street-mile? Yes.

Witness said that he had given special .attention to the working of motor traffic, and Was a member of the Liverpool.Self-nrooelled Traffic Association, which body carried out preliminary experiments for heavy motors.

In reply to a member of the committee (Mr. C. N. Nicholson, M.P.) as to whether there were any motor omnibuses at present in Burnley in the public service, witness said that there was a workmen's traffic service, and a week-end service to Harle Syke, but it was a very occasional service.

Further, questioned by Mr. Wedderburn, Mr. Mosley said that at first the Corporation would buy probably five or six motor omnibuses ; when they established, at the outset, a service of three buses they would have to have one or two in reserve. He calculated that the Corporation would ultimately require ten omnibuses, Mr. Wedderburn : And what will they cost each?—About ,4't,000 each, on account of their being a special type of vehicle; we could not accept the standard vehicle in Burnley.

The witness explained that a special type was necessitated by low bridges— there was a low railway bridge and a low culvert. They had also required the top decks to be protected from the wind, and the platform to have a vestibule to prevent people froni falling off the omnibus into the street. It was the intention to have a two-storeyed omnibus, and the cost of such a vehicle as suggested would be rather above the cost of the standard vehicle. He was quite confident that j;i,000 per car would he sufficient to allow ; he had consulted builders of motorbuses, In reply to Mr. Wedderburn as to whether the ZI,000 bus caused less noise than cheaper buses, witness said he thought there was no doubt that they would have a silent bus in Burnley ; otherwise, they would have none at all.

There was no opposition, and, as stated above, the powers sought were granted.