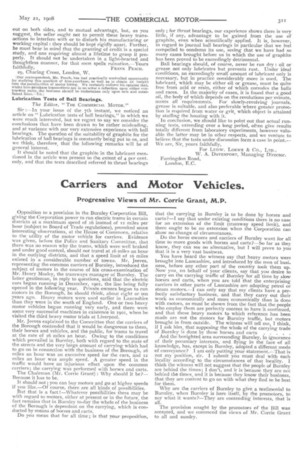 Opposition to a provision in the Burnley Corporation Bill, giving the Corporation power to run electric trams in certain districts at a maximum speed of 16 instead of 12 miles per hour (subject to Board of Trade regulations), provoked some interesting observations, at the House of Commons, relative to the utility of the motor vehicle for carriers. Evidence was given, before the Police and Sanitary Committee, that there was no reason why the trams, which were well braked and under good control, should not travel at 16 miles an hour in the outlying districts, and that a speed limit of 16 miles existed in a considerable number of towns. Mr. Jeeves, representing the common carriers of Burnley, introduced the subject of motors in the course of his cross-examination of Mr. Henry Mozley, the tramways manager of Burnley. The latter gentleman, in reply to questions, said that the electric cars began running in December, 1901, the line being fully opened in the following year. Private owners began to run motors in the Borough, he should think, about eight or ten years ago. Heavy motors were used earlier in Lancashire than they were in the south of England. One or two heavy motor vehicles began running very early, and there were some very successful machines in existence in igro, when he visited the third heavy motor trials at Liverpool.

Mr. JeeYes explained to the Committee that the carriers of the Borough contended that it would be dangerous to them, their horses and vehicles, and the public, for trams to travel at the rate of 16 miles an hour. Owing to the conditions which prevailed in Burnley, both with regard to the state of the streets and the very large amount of carrying which had to go on in connection with the business of the Borough, 16 miles an hour was an excessive speed for the cars, and 12 miles an hour was ample speed. A greater speed in the traffic would have an injurious effect upon the common carriers; the carrying was performed with horses and carts.

The Chairman (Mr. Corrie Grant) : Why should it be?— Because it has to be.

It should not ; you can buy motors and go at higher speeds if you like.—Of course, there are all kinds of possibilities.

But that is a fact !—Whatever possibilities there may be with regard to motors, either at present or in the future, the fact remains that in Burnley to-day the whole of the business of the Borough is dependent on the carrying, which is conducted by means of horses and carts.

Do you mean that for all time ; is that your proposition, that the carrying in Burnley is to be done by horses and carts ?—I say that under existing conditions there is no case for an extension of the limit (tramway speed limit), and there ought to be no extension when the Corporation can show no change of circumstances.

Do the horse owners and carriers of Burnley want for all time to move goods with horses and carts P—So far as they know, they can see no alternative, but I will prove to you that it is a very vast business.

You have heard the witness say that heavy motors were brought into Lancashire, and introduced by the men of business, before any other part of the country took them up. Now you, on behalf of your clients, say that you desire to carry on the carrying traffic of Burnley for all time by slow horses and carts, when you are told that the enterprising Carriers in other parts of Lancashire are adopting petrol or steam motors.—I can only say that my clients have a perfectly satisfactory business, and that they carry out their work as economically and more economically than is done with motors, as must be shown from the fact that the people who employ them are perfectly content to have it continued, and that these heavy motors to which referenee .has been made are not the motors for Burnley traffic' but motors brought in from outside. The witness will tell me, I think, if I ask him, that supposing the whole of the carrying trade of Burnley is done by these horses and carts . . . . .

And the benighted area surrounding Burnley, in ignorance of their pecuniary interests, and flying in the. face of all knowledge, has, except in Burnley, adopted a different mode of conveyance? I am only putting your statement.—That is not my position, sir. I submit you must deal with each locality according to the circumstances of that locality. I think the witness will not suggest that the people of Burnley are behind the times; I don't, and it is because they are not behind the times, and it is because they know their business, that they are content to go on with what they find to be best for them.

Why are the carriers of Burnley to give a testimonial to Burnley, when Burnley is here itself, by the promotors, to say what it wants ?—They are contending interests, that is all.

The provision sought by the promotors of the Bill was accepted, and we commend the views of Mr. Carrie Grant to all and sundry.