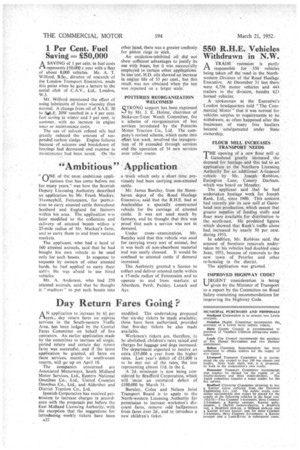 Page 34, 21st March 1952 — Day Return Fares Going ?
Close
Noticed an error?
If you've noticed an error in this article please click here to report it so we can fix it.

AN application to increase by 611per, cent., day return fares on express services in the South-eastern Traffic Area, has been lodged by the Central Fares Committee on behalf of five operators. An earlier application made by the committee to increase all single, period return and certain day return fares was successful, and if the latest application be granted, all fares on these services, mainly to south-coast resorts, will go up on April 10.

Ipswich Corporation has received permission to increase charges in accordance with the proposals put before the East Midland Licensing Authority, with the exception that the suggestions for introducing 'weekly -tickets have been A32 modified. The undertaking proposed that six-day tickets be made available; these have been authorized, provided that five-day tickets be also made available.

Workmen's tickets are, therefore, to he abolished, children's rates raised and charges for luggage and dogs increased. The department expected to receive an extra £35,000 a year from the higher rates. Last year's deficit of £31,000 is to be met out of the rates, the loss representing almost 11d, in the £.

A 2d. minimum is now being considered by Bradford Corporation, which will incur an estimated deficit of £100,000 by March 31.

Burnley, Coln and Nelson Joint Transport Board is to apply to the North-western Licensing Authority for permission to increase workmen's discount -fares, remove odd halfpennies from fares over 2d., and to introduce a new children's ticket.