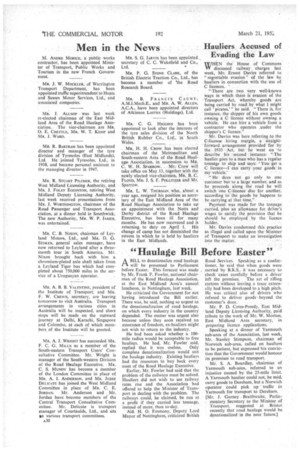 Page 32, 21st March 1952 — Men in the News
Close
Noticed an error?
If you've noticed an error in this article please click here to report it so we can fix it.
Keywords : Road Haulage Association, East Midlands

M. ANDRE MORICE, a public works contractor, has been appointed Minister of Transport, Public Works and Tourism in the new French Government.

MR. R. BARTRAM has been appointed director and manager of the tyre division of Tyresoles (East Midlands), Ltd. He jointed Tyresoles, Ltd., in 1938, and became personal assistant to the managing director in 1947.

M. C. B. NIXON, chairman of Leyland Motors, Ltd.' and MR. D. G. Situt.Es, general sales manager, have now returned to Leyland after a threemonth tour in South America. Mr. Nixon brought back with him a chromium-plated axle shaft taken from

• a Leyland Tiger bus which had completed about 750,000 miles in the service of a Uruguayan operator.

MR. A. B. B. VALENTINE, president of the Institute of Transport; and MR. F. W. CREWS, secretary, are 'leaving tomorrow to visit Australia. Transport arrangements • in various cities in Australia will be inspected, and short stops will be made on the outward journey at Delhi, Karachi, Singapore and Colombo, at each of which members of the Institute will be greeted.

MR. A. J. WRIGHT has succeeded MR. F. C. G. MILLS as a member of the South-eastern Transport Users' Consultative Committee. Mr. Wright is manager of the South-western Division of the Road Haulage Executive. MR. C. S. MUNDY has become a member of the London Committee in place of MR. A. L ANDERSON, and MR. JESSE DELICATE has joined the West Midland Committee in place of MR. C. E. JORDAN. Mr. Anderson. and Mr. Jordan have become members of the Central Transport Consultative Committee. Mr. Delicate is transport manager of Courtaulds, Ltd., and sits an various transport committees.

MR. P. G. STONE CLARK, of the British Electric Traction Co., Ltd., has become a member of *the Road Research Board.

MR. B. FRANCIS CAUNT, A.M.I.Mech.E., and MR. A. W. ALLEN, A.C.A., have been appointed directors of Atkinson Lorries(Holdings), Ltd.

MR. C. G. HIGGINS has been appointed to look after the interests of the tyre sales division of the North British Rubber Co., Ltd., in South

MR. H. H. Cs.ow has been -elected chairman of the Metropolitan and South-eastern Area of the Road, Haulaga Association, in succession to MR. C. W. H. SPARROW. .. MT. Crow will take office on May 13, together With the newly elected vice-chairmen, MR. B. C. FLOYD, MR, I. S. F. POLLITZER and Mr.

Ma. L. W. THURMAN. who,, about. a year ago, resigned his position as.secretary of the East Midland Area of the

• Road Haulage Association to take up an appointment with the Notts and Derby district of the Road Haulage Executive, has been for many months. He has now recovered and is returning to duty on April 1. • His change of camp has not diminished the esteem in which he is held by hauliers in the East Midlands.