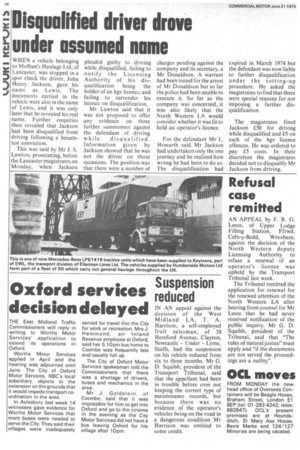 AN APPEAL by F. R. G. Leece, of Upper Lodge Filling Station, Ffrwd, Cefn-y-Bedd, Wrexham. against the decision of the North Western deputy Licensing Authority to refuse a renewal of an operator's licence was upheld by the Transport Tribunal last week.

The Tribunal remitted the application for renewal for the renewed attention of the North Western LA after hearing from counsel for Mr Leece that he had never received notification of the public inquiry. Mr G. D. Squibb, president of the Tribunal, said that "The rules of natural justice" must apply and "if the documents are not served the proceedings are a nullity".