THE FUTURE OF ROAD ADMINISTRATION. 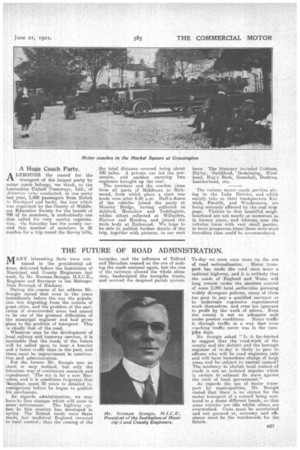 MANY interesting facts were contained in the presidential address, delivered before the Institution of Municipal. and County Engineers last. week, by Mr. Norman Scorgie,

Engineer and Surveyor to the Metropolitan Borough of Hackney.

During the. course of his address Mr. Scorgie stated that even in the years immediately before the war the population was migrating from the centres of great cities, and the problem of the sanitation of overcrowded areas had ceased to be one of the greatest difficulties of the municipal engineer and had given place to the problem of transport. This is chiefly that of the road.

Whatever may be the development of local railway and tramway services, it is inevitable that the roads of the future will be called upon to bear a heavier and a faster traffic than in the past, and there must be improvement in construction and administration.

For the former Mr. Scorgie sees no short or easy method, but only the laborious way of continuous research and experiment. The cry is for a new Ma.c adam and it is sometimes forgotten that Macadam spent 50 years in detailed investigations before he began to publish his conclusions.

As regards administration, we may have to face changes which will seem to some unfortunate. The highway ayetern in this country has developed in cycles. The Roman roads .were State roads, but medival England reverted to local control; then the coming of the

turnpike, and the influence of Telford and Macadam seemed on the eve of making the roads national again, but the rise of the railways altered the whole situation, bankrupted (the turnpike trusts, and revived the despised parish system.

To-day we eeem once more fill the eve of road nationalieation. Motor transport has made the. road once more a national highway, and it is unlikely that the roads of England and Wales will long remain under the absolute control of some 2,000 local authorities pursuing widely divergent policies, many of them too poor to pay a qualified surveyor or to undertake expensive experimental work themselves, and even too ignorant to profit by the work of others. Even the county is not an adequate -unit under present conditions. Motor traffic is through traffic in a way that even coaching traffic never was in the turn

pike days. . Mr. Scorgie asked "Is it far-fetched to suggest that the road-work of the county and the district and the borough engineer of to-day is likely to pass to officers who will be road engineers only and will have immediate charge of large areas and be subjectto central control? The tendency to abolish local control of reads is not an isolated impulse which is certain to exhaust its wave against the reek of local government."

As regards the use Of motor transport by municipalities, Mr, Scorgie stated that there is no excuse for the motor transport of a council being scattered in a dozen different hands, .so that some. vehicles are idle whilst others are overworked. Costa must be ascertained and not guessed at, economy and efficiency must be the watchwords for the future.